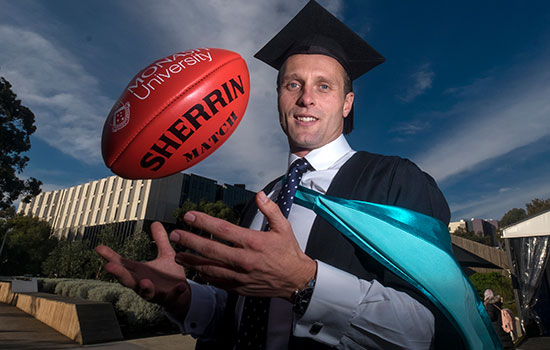 On Tuesday 16 May 2017 dual Hawks premiership player, Brad Sewell received his MBA at a graduation ceremony at Monash University.

Brad had been studying the MBA part time for the past four years and said that is has been transformative, giving him new ways of approaching his current leadership roles within a number of community organisations supporting young people:

“The Monash MBA has really broadened my horizons and given me a huge confidence boost,” he said.

“The program has given me new insights and ways of approaching business challenges within my community-led positions which I hope will lead to future career success for myself and for those I support.”

Brad is Director of the Australian Rules Football College, an organisation that combines education with an athletic development program, ensuring young people achieve successful careers while developing their football skills.

He is also on the Board of Ladder, an independent, not-for-profit organisation established by the AFL Players’ Association and supported by the AFL to help young people aged 16-25 break the cycle of homelessness.

“While the traditional route into an MBA program is often a finance or business background, at Monash we are looking for a diversity of professional skills and experiences that lend themselves to business leadership,” Professor Hall said.

“While it may not seem immediately obvious, those with a professional sports background like Brad Sewell have the perfect set of team working and leadership skills that lend themselves to business positions. These students gain confidence to move into successful business careers and at the same time inspire their student peers. I congratulate Brad on achieving his MBA and wish him all the very best for the future.”