A study published this week in Proceedings of the National Academy of Sciences of the USA by a Monash University team shows that a new threat faces soil sustainability everywhere.

The team found that, from the polar regions to the tropics, invasive soil-dwelling species are typically better able to cope with warming than their indigenous counterparts. Climate change will benefit invasive species, suggesting major changes to the functioning of ecosystems, and potentially bad news for the United Nation’s Sustainable Development Goals of conserving and restoring terrestrial ecosystems (SDG 15: Life on Land), and ending hunger and malnutrition (SDG 2: Zero Hunger).

The work was conducted on springtails – small soil invertebrates that are globally ubiquitous, and influence both soils and the aboveground ecosystems which rely on them. Together with other invertebrates, such as earthworms, these animals make soil ecosystems work.

As with earthworms, humans have moved springtail species unintentionally around the world from their natural homes to new environments. What the study shows is that these alien species are much more tolerant of high temperatures than their indigenous relatives. 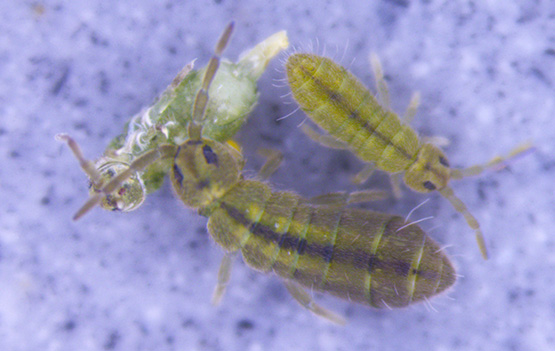 An Isotomurus springtail species. Alien species like these have, on average, greater resistance to high temperatures than their indigenous counterparts. Image: ChownLab, Monash University.

“The impacts of soil invasives are becoming increasingly well known” said Dr Charlene Janion-Scheepers, lead author, “What we have found is that alien invasive species will thrive under climate change, much more so on average than local species, irrespective of where one looks”.

Co-author, Associate Professor Carla Sgrò, further added “We also tested to see if indigenous local species might evolve greater tolerance. They simply cannot. So, for the foreseeable future, we will be in a world where on average, invasive species are going to be the winners.”

Mounting concerns about the impacts of biological invasions for agriculture and terrestrial ecosystems have recently made world headlines. What this study does is demonstrate that impacts will be exacerbated by changing climates.

“The Paris Agreement on reducing emissions to combat climate change becomes all the more important when we see results like this” emphasized team leader Professor Steven Chown. “What’s at stake is nothing less than the health of our ecosystems.”