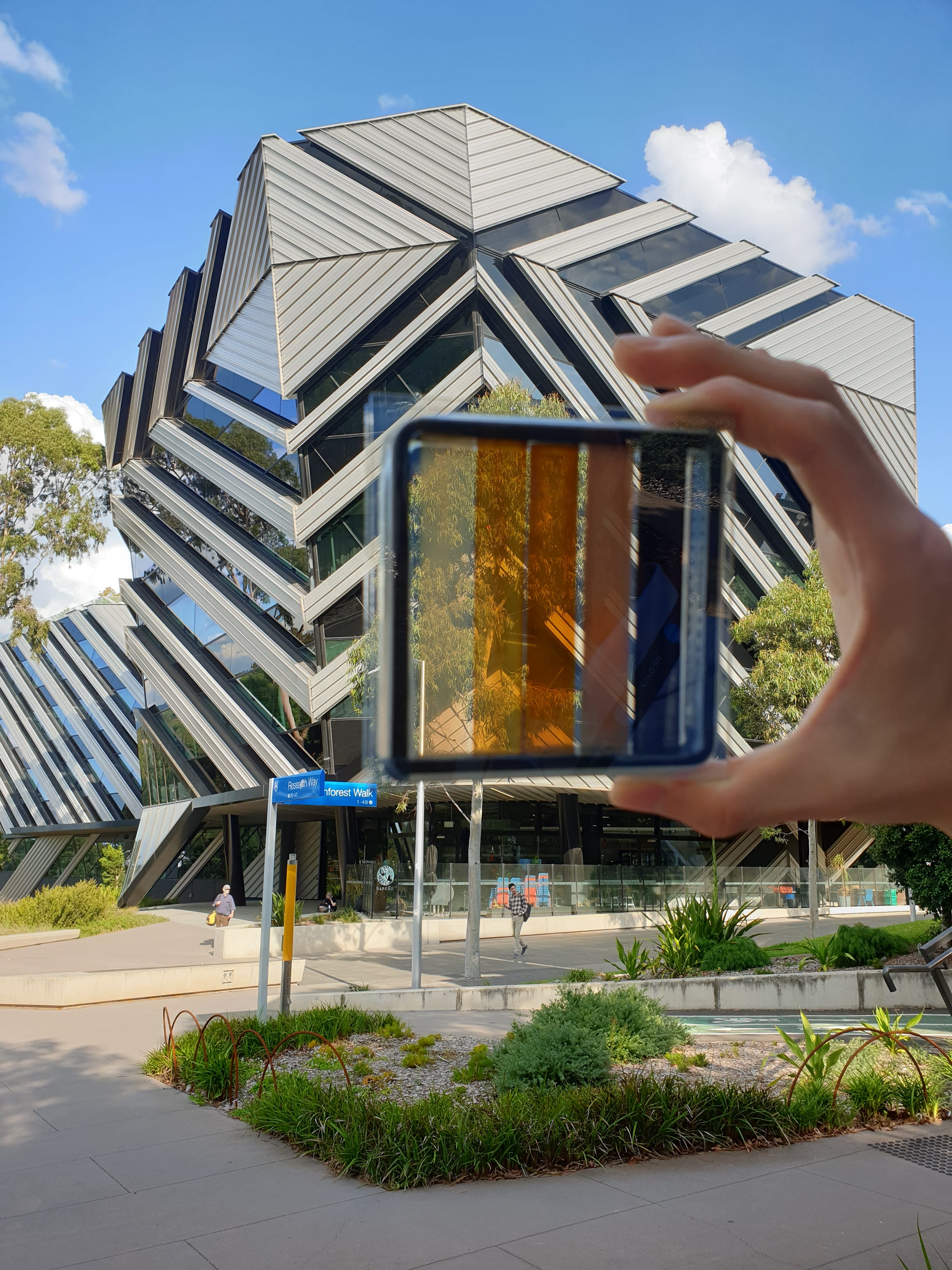 A prototype semi-transparent solar cell in development as an alternative to window glass.

Net zero within reach for major Australian city through comprehensive adoption of photovoltaics in built environment.

New modelling, on a scale ranging from individual structures through to neighbourhoods and an entire city, has shown that buildings in the City of Melbourne could provide 74% of their own electricity needs if solar technology is fully integrated into roofs, walls and windows.

Published in the journal Solar Energy, the research, led by members of the ARC Centre of Excellence in Exciton Science based at Monash University, together with collaborators at the University of Lisbon, is the first of its kind anywhere in the world to model the viability and impact of window-integrated photovoltaics, alongside other solar technologies, at a city scale.

Further gains could be made through the widespread deployment of emerging, highly efficient ‘solar windows’ and photovoltaic technology integrated in building facades.

The researchers hope that by using the modelling they have developed, policy makers, energy providers, construction companies and building owners will be able to optimise the PV potential of both new and existing structures.

The researchers compared Melbourne’s 2018 electricity consumption to the electricity production that could potentially be achieved through fully and widely building-integrated solar. Consumption data from Melbourne CBD was obtained from Jemena, CitiPower & Powercor distribution companies and was accessed through the independent Victorian research body, the Centre for New Energy Technologies (C4NET).

At city-scale modelling, they found that photovoltaics could provide 74% of Melbourne’s building consumption needs. Rooftop solar would constitute 88% of this supply, with wall-integrated and window-integrated solar delivering 8% and 4% respectively.

Wall and window-integrated solar technology was shown to suffer less of a reduction in efficiency during winter months relative to rooftop solar, delivering more consistent year-round benefits and value.

The potential contribution of window-integrated solar rose to 18% at the neighbourhood scale, reflecting high building heights and window to wall ratios.

Detailed modelling enabled the incident solar radiation and PV potential of the urban areas to be simulated. A large range of factors had to be taken into consideration, including the impact of shadows casted by shading systems and balconies, as well as the performance characteristics of the various solar technologies.

Among other techniques, correlation and linear regression analysis were performed to identify the interdependency between urban form indicators and the annual PV potential.

The total area featured in the study is the 37.4 km2 area of central Melbourne, of which 35.1km2 was built floor area in 2019, consisting primarily of residential and commercial buildings.

The results showed that the photovoltaics potential of this area is driven mainly by the possibility of adding further rooftop solar.

While blocks with high rooftop and wall solar potential are found across the city, the highest potential for window-integrated solar gains is in the city’s high-density urban centres, such as the central business district.

“By using photovoltaic technology commercially available today and incorporating the expected advances in wall and window-integrated solar technology over the next ten years, we could potentially see our CBD on its way to Net Zero in the coming decades,” said lead author Professor Jacek Jasieniak.

“We began importing coal-fired power from the LaTrobe Valley in the 1920s to stop the practice of burning smog-inducing coal briquettes onsite to power our CBD buildings, and it’s now feasible that over one hundred years later, we could see a full circle moment of Melbourne’s buildings returning to local power generation within the CBD, but using clean, climate-safe technologies that help us meet Australia’s Net Zero 2050 target. “

“Although there’s plenty of policies supporting energy-efficiency standards for new buildings, we’re yet to see a substantial response to ensuring our existing buildings are retrofitted to meet the challenges of climate change,” said co-author Dr Jenny Zhou. “Our research provides a framework that can help decision-makers move forward with implementing photovoltaic technologies that will reduce our cities’ reliance on damaging fossil fuels.”

“In the near future, market penetration and deployment of high-efficient solar windows can make a substantive contribution towards the carbon footprint mitigation of high-rise developments,” said first author Dr Maria Panagiotidou. “As the world transitions towards a net-zero future, these local energy solutions would play a critical role in increasing the propensity of PVs within urban environments.”

This research was supported by data from the Centre for New Energy Technologies (C4NET), and received funding from Australian Renewable Energy Agency (ARENA) as part of its Research and Development Program – Solar PV Research (2017RND013), as well the ARC Centre of Excellence in Exciton Science (CE170100026).

For any other topics on which you may be seeking expert comment, please contact the Monash University Media Unit on +61 3 9903 4840 or media@monash.edu