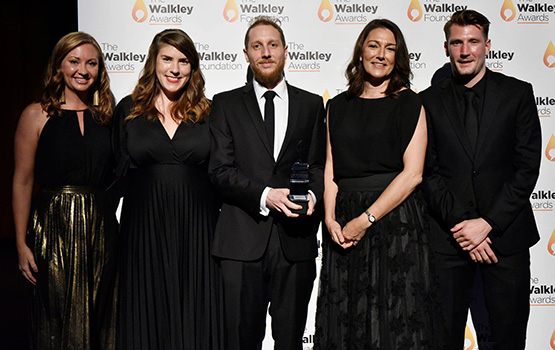 Monash alumna Calla Wahlquist (second from left) and her colleagues at The Guardian have won the 2018 Walkley Award for innovation.

Ms Wahlquist, a Monash Bachelor of Arts graduate in 2009, was a key member of The Guardian Australia’s Deaths inside project, which tracked Indigenous deaths in custody since 2008.

Deaths inside has a beautifully presented interactive database, which represents months of in-depth research and project design.

Every coronial finding, relating to an Indigenous death in custody, was examined by The Guardian reporting team. They took months to trawl through the reports.

“Projects like this take a huge amount of work,” Ms Wahlquist said.

“We are all incredibly grateful to Guardian Australia and our editor, Lenore Taylor, for giving us the time — months and months of time — to get it done.”

Ms Wahlquist, who has reported in Tasmanian and Western Australian regional areas during her career, has returned to Victoria to work in The Guardian’s Melbourne bureau.

She urges journalism graduates to leave the city and walk the hard yards to prepare for all sorts of scenarios in journalism.

“Go to a regional paper in a tiny town, do a stint at Cambodia Daily, pick up a parental leave fill contact at ABC Rural,” Ms Wahlquist said.

“You will get to cover stories that in a bigger publication would be snapped up by senior reporters and learn how to manage a round.

“You’ll also get the perspective that comes from being out of your comfort zone. It always helps to be a bit of an outsider in journalism.”