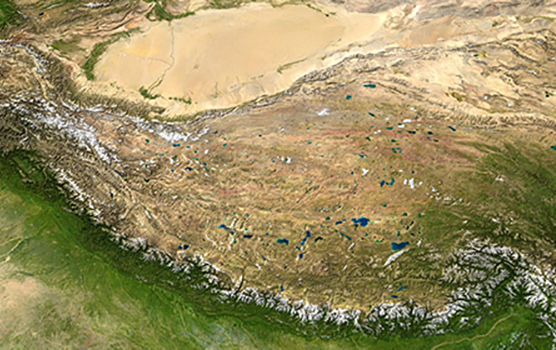 The shape of the Tibetan Plateau – also known as the world’s rooftop – may be controlled by the strength of the tectonic plates - shedding new light on how it was formed, new international research, involving Monash University, has found.

The Tibetan Plateau is one of the most seismically active in the world and understanding its geological history could provide major insights into modern earthquake activity.

“It is thought that this collision is likely to have caused Earth's crust to bunch up into a massive pile – which are the Himalaya Mountains and Tibetan Plateau we see today,” he said.

“But our study has shown that the Tibetan Plateau’s shape may be due to the Asian Plate having a strong western side and weak eastern side, leading to the Plateau’s broad, asymmetrical scab surrounded by peaks.”

The research, led by the Chinese Academy of Sciences, was published this week in Nature Communications.

“The Tibetan Plateau is not uniformly wide,” said Dr Lin Chen, the study's lead author from the Chinese Academy of Sciences.

Dr Capitanio said many of the past models focused on the surface geology of the actual Plateau region but an explanation might be found further down, where the Asian and Indian plates meet.

“There is a huge change in topography on the Plateau, or the Asian plate, while the landform and moving speed of the Indian plate along the collision zone are essentially the same from west to east,” he said.

“When we ran the models we found that the strong Asian scenario plate led to a narrow plateau, but the weak Asian plate model lead to a broad plateau, like what we observe today,” Dr Capitanio said.