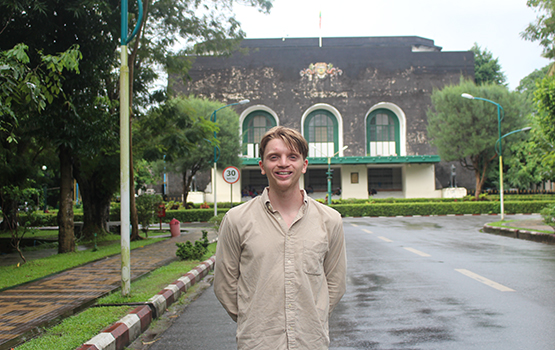 Monash University Arts/Law student James Barklamb has been awarded a place in the prestigious Schwarzman Scholars program, one of the most competitive fellowships in the world.

The program aims to improve understanding of China among the next generation of global leaders through first-hand experience.

James will undertake a Masters in Global Affairs at Tsinghua University in Beijing with a focus on China’s potential role in global diplomacy and conflict resolution.

“I want to better understand China's growing presence as a military and diplomatic actor on the international stage, and how Chinese leadership can help protect vulnerable communities at risk of conflict,” he said.

“Fostering deeper understanding of China will be vital to Australia's global engagement over coming decades and as a Schwarzman Scholar, James will be among the next generation of leaders in that endeavour,” Professor Gardner said.

Monash has an exceptional record of endeavour in and with China and it is wonderful that a Monash student has been recognised with such a prestigious opportunity. I wish him every success in his studies at Tsinghua University.”

Throughout his studies, James focused on seeking justice for vulnerable communities, visiting Rwanda and South Africa and completing an internship under the Commission for the Fight Against Genocide.

He has worked on projects supporting victims of people trafficking across the Thai-Laos border, assessing crimes of militias in Northern Iraq and Syria and in the Prosecution Office of the Courts of Cambodia.

He also spent a semester in Myanmar as one of the first foreign students to live and study on campus since Yangon University was reopened to undergraduates in 2013.

Currently interning at the Louisiana Capital Assistance Centre, James is working on criminal justice reform around the death penalty.

He sees the Schwarzman program as a chance gain the leadership and influence skills needed to play a role in helping shape developing democracies.

“The program's commitment to developing scholars as future leaders is incredibly exciting, and I hope to use this leadership training to help support transformational change in international institutions in the years to come,” he said.

“China has a growing presence on the international stage, and being a Schwarzman Scholar represents the chance to work under and receive guidance from world experts in foreign policy and public policy studies".

“I'm so grateful for the support I've received at Monash as, without it, such an opportunity would be otherwise inconceivable.”

James encouraged other students to take advantage of the international opportunities available through Monash and supports increased access to education as a mentor with the University's Access Monash program.

“I've been able to support Monash's aim of increasing participation from underrepresented schools, and have been proud to see students I've mentored begin their studies at Monash,” he said.

James, the first Monash student to secure a place in the program, and his fellow participants will join five alumni from two previous cohorts.

The program, which began in 2016, is highly competitive, with an acceptance rate on par with the Rhodes and Marshall scholarships.