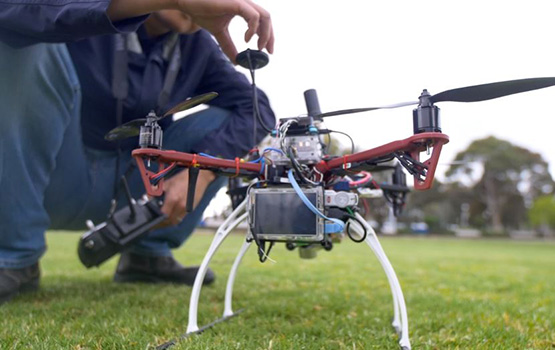 The team has recently completed field experiments using optical mapping which can determine soil moisture levels in the near-surface. The data taken from the drone can be downloaded and used to produce a map of ground soil moisture levels to inform the farmer on how best to irrigate the paddock.

While equipped with optical mapping as a proof-of-concept, the drone has now advanced to passive microwave sensing technology using L-Band waves, with further research being conducted on the potential for using P-band waves. P-Band waves are expected to be able to measure up to 15cm into the soil unimpeded by vegetation and tillage features.

Drones have the capacity to analyse soil moisture at metre-level scales within a paddock, allowing farmers to focus on specific crop irrigation, and overcomes the challenges of aircraft or satellite mapping.

Testing has taken place across two farms in regional Victoria and Tasmania. One was at a dairy farm using a centre pivot irrigator and the other was a crop farm using a linear shift irrigator.

“We need to produce 60% more food with the same amount of land and water, and we can only achieve this by being more efficient with the water we use through irrigation,” Professor Walker, Head of Civil Engineering at Monash University, said.

“We need to know how much the crop needs, how much moisture is already there and apply just the right amounts of water in the correct places to avoid wastage while keeping the crop at its peak growth.”

Good soil moisture allows for the optimal growth and yield of crops, while at broader spatial scales also regulates weather, climate and flooding. The water levels in the soil controls evaporation over land and thus the energy fluxes into the atmosphere. This drives the atmospheric circulation, which drives climate.

Professor Walker said the farming industry has welcomed smarter and more automated practices, but there are few tools available to make the already difficult workloads of farmers more manageable.

“At best, farmers might have a single soil moisture sensor in a paddock, but this doesn’t allow for the optimal application of water, especially as this resource becomes scarcer. Plus it won’t take into account moisture variation levels across the individual paddocks,” Professor Walker said.

“Farmers also need to cooperate; water conservation and efficiency is a collective responsibility. Everyone needs to do their part to use water more effectively or we’re at risk of running out completely,” Professor Walker said.

“As the world’s driest continent facing climate change, a growing population and a greater demand for food, water conservation should be one of Australia’s top priorities.”

This project is part of Monash University’s expanding interdisciplinary focus on the use of data and technology to solve real-world problems for today and in the future.

The Autonomous Drones for Soil Moisture Mapping project was funded by Monash Infrastructure through a seed funding scheme. This project forms part of Professor Walker’s wider research into soil moisture mapping and autonomous farming. Watch this project in action here.