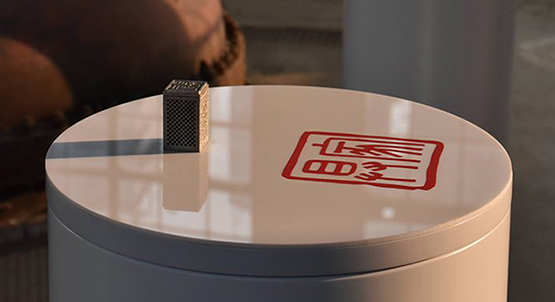 Innovators was an exhibition commissioned by the Australian Embassy in Beijing to showcase advances in sustainable Australian innovation and design.

“It is a great honor to be a finalist in the Victorian Premier’s Design Awards and recognition of MADA’s practice based research here at Monash University” Mr Wong said.

Innovators featured two parallel rows of white geometric columns, on top of which sat a small 3D-printed titanium block that housed a digital archive of major achievements in Australian innovation and design.

Using smartphones, visitors were able to view iconic Australian designs, like the Oi bicycle bell, through low-energy Bluetooth with IOS or with augmented reality on Android.  The digital archives were automatically triggered when visitors approached the cubes resting on the podiums.

The technology-enabled curatorial practice has been applauded for its sustainable design, which eliminates the complicated logistics of shipment, curation, insurance and installation.

The project was a collaboration of MADA, the Australian Embassy Beijing, Monash University, CSIRO, and the Design Institute of Australia.

BlackBOX – Design and Innovation was also a feature at Beijing Design Week 2016 and formed part of the strategy to support Melbourne’s bid to be the 2018 Business of Design Week (BoDW) 2018 guest city. This annual event is Asia’s leading event on design, innovation and brands which attracts more than 120,000 visitors from all over the world.

The BlackBOX exhibition delivered a virtual user experience of 36 design and innovation achievements from Melbourne.

The exhibition featured 3D-printed cubes that represented solid-state memory, similar to the original black box idea developed by Melbourne inventor David Warren in 1957. Uniformly shaped, the virtual archives came to life in the luminous blue lit space. The archives were activated and experienced through low-energy Bluetooth on IOS and augmented reality platforms on Android. The idea was to present the vibrant Melbourne design scene as “….at the forefront of innovation with the latest digital user experience platforms”.

The purpose-built BlackBOX stand and unique lighting system was designed by researcher and curator Ian Wong to maximise the impact of the curatorial research from Monash University.

The BlackBOX exhibition was lauded for elevating museum and art gallery experiences to exciting virtual user experiences. The design team led by Monash Univeristy included the Design Institute of Australiaand and Diadem.

“Practice-based research at MADA is outstanding across all disciplines,” Mr Wong said.

“To be recognized as a finalist for these two projects that demonstrate the success of Monash Universities design and curatorial practice-based research is an honor.”

The Victoria Premier’s Design Awards was established in 1996 by the Victorian Government. It has since then looked after the design sector, enabling and rewarding innovations that contribute to the growth of Victorian businesses and communities.