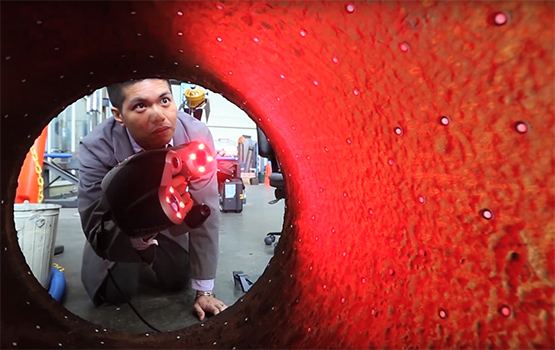 Australia’s water pipe network consists of over 183,000 km of buried pipes and is considered a major national asset valued at over $200 billion. Yet pipe failures are a common occurrence and cost $1.5 billion annually in pipe maintenance and renewal.

Fractures through corrosion patches lead to water leakage and with time, fractures can grow to a critical level leading to catastrophic pipe bursts, such as the recent incident on Montague Street, South Melbourne.

Monash University researchers from the Faculty of Engineering have discovered the characteristics of cast iron pipes failures, dubbed the Leak Before Break (LBB) mechanism.

Applying this mechanism, Professor Jayantha Kodikara and his research team developed tools and analytics that are now being used by many water utilities to prevent and calculate timely intervention for leaking pipes, reducing major pipeline failures.

The researchers found that water leaks play a more important role as predictors of impending pipe failures and as indicators for the health of the overall pipe network. Previously, water leakage was addressed mainly to minimise water wastage.

“Predicting the pipe failure and its prevention is extremely complex due to the interaction of various variable soil and water forces and processes of underground corrosion. Through the LBB mechanism, we hope to explain how pipes can be renewed at optimal times without the cost of catastrophic failure,” said Professor Jayantha Kodikara.

The LBB mechanism is implemented through a new fibre optic sensor system optimised to detect leaks, which has been developed by Monash researchers.

The sensors are deployed into operational water pipes where leaks can be detected and the condition of the pipes can be easily assessed. If the pipeline health has been determined to be weak, the pipeline can be rehabilitated to extend its service life instead of replacing it.

Application methodologies for smart and trenchless linings are also being developed to rehabilitate deteriorated hazardous asbestos cement pipes and cast-iron pipes as part of the continuation of this research, aiming to breathe new life into old pipelines.

In order to apply this research on a global scale, the team has been conducting workshops and webinars to disseminate key findings to organisations such as Water Research Foundation USA (WaterRF) and UK Water Industry Research (UKWIR).

Professor Kodikara said: “The worldwide adoption of the LBB concept for water pipelines has presented new challenges with regard to developing newer and economical means of detecting leaks in practical situations over much larger scales.

“In light of this situation, we’re continuing to investigate and develop advanced leak detection sensors and systems to process the leak signals from sensors.

“Funding for government infrastructure could be cut significantly, and the community less inconvenienced, if we can develop the right technology to detect critical pipe failures before they get out of control.”