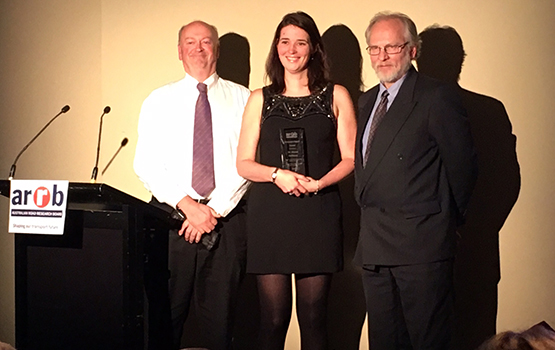 Monash University has been presented with two important honours at the inaugural Australian Road Research Board (ARRB) Awards in Melbourne.

The study explored approaches to reduce public transport fare revenue loss from fare evasion which in 2011-12 was running at around 12 percent of trips or $79 million annually in Melbourne. Following the implementation of the recommendations, revenue loss from fare evasion declined to 5 percent (May 2015), giving an estimated annual saving of $50 million in Melbourne alone.

Prof Currie used his extensive experience in public transport research to design the research program and then to lead the project team, which included research fellow Dr Alexa Delbosc. She used her expertise in psychology and travel behaviour to shape the questionnaires and interview scripts and to lead the modelling and analysis tasks.

“The award is great recognition of research providing extensive assistance to industry, given the vast amount of money saved internationally,” Prof Currie said.

The study’s findings resulted in several major shifts to how fare evasion is managed in Melbourne to the extent that they then conducted follow-on studies in London, Paris, Toronto, New York, Boston, Sydney, Brisbane and Perth in 2014.

“Applying good research methods to an issue like (fare evasion), which we really didn’t understand, is good advanced engineering and shows Monash is the place where cross faculty research can help industry,” Prof Currie said.

This research discovered that the market conditions found in Melbourne were apparent in all international cities studied.  Professor Currie then visited Transport for London in 2015 where elements of the approach rolled out in Melbourne are being implemented.

“It is not unreasonable to expect the research could be applied in many international cities, achieving financial savings of the order of several billions of dollars annually, significantly improving the performance and available investment for public transport in world cities.

Dr Delbosc said she was thankful for Public Transport Victoria commissioning the research.

“They got some backlash early on from people thinking this project was a waste of money - and without PTV we wouldn't have had the project in the first place,” Dr Delbosc said.

The New Research Talent Award was awarded to Arooran Sounthararajah who commenced his PhD in 2014 at Monash University under the supervision of Professor Jayantha Kodikara and Dr Ha Bui.

He was chosen from among many researchers under 35 years of age, who have made a significant discovery in the previous 24 months as part of their research activities related to road transportation.

His research primarily focused on advancing the knowledge base of cement stabilised pavement materials (CSPMs) on fatigue damage to provide a practical, sustainable and effective solution to the current critical issues in CSPMs.

While CSPMs have been increasingly used in the construction of new road pavement bases across Australia, Arooran’s research revealed a fibre optic sensing technique to detect initiation and propagation of cracks in CSPMs. Along with detecting cracks, it allows the monitoring of road’s long-term performance under traffic.

He has utilised a cutting-edge pavement testing facility in his research and found for the first time that both the pavement thickness and axle configuration of heavy vehicles have a considerable effect on the fatigue life of CSPMs.

“I am deeply honoured to have received the award in the presence of so many leaders of the roads and transport industry. It boosts my motivation to continue reinforcing and uplifting the pavement engineering domain for its practical applications. I thank, Professor Jayantha Kodikara (Acting Head, Dept. of Civil Eng.), for his tremendous motivation and priceless guidance all through my PhD study,” Arooran said.