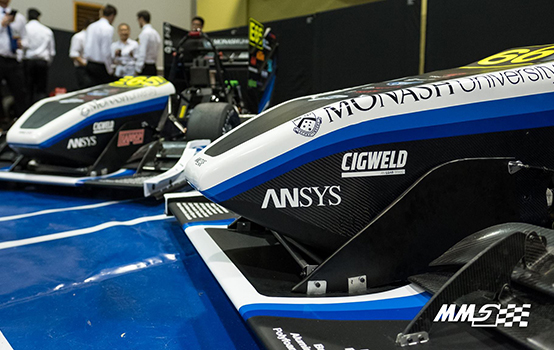 Monash University and the Confederation of Australian Motor Sport (CAMS) will join forces to deliver a tailored schools program, encouraging young people to get involved in motor sport and highlight the connections between racing, engineering and STEM.

Motor sport is an important contributor to the nation’s economy, generating around $2.7 billion in direct industry output each year and supporting more than 16,000 direct jobs. This new program will help young people understand what is needed to get a start in the industry, whether it be as an engineer, designer or component maker.

In the first partnership of its kind, CAMS and Monash University will help deliver the ‘Motorsport Experience’ program to high school aged students from 2018. CAMS will also donate a number of licences to members of the Monash Motorsport team to encourage them to continue to chase their passion.

Speaking at the launch of Monash Motorsport’s 2017 program, CAMS CEO Eugene Arocca said he was excited about the partnership.

“We are thrilled to be working closely with the Monash Motorsport team to encourage even more people to get involved in our great sport,” Arocca said.

“It’s an amazing opportunity for our two organisations to utilise our collective expertise to deliver the ‘Motorsport Experience’ program to high school students, while also allowing us to work closely with members of the Monash Motorsport team who will be the industry leaders into the future.”

Arocca confirmed the program would also have a strong focus on encouraging women to get involved in the industry.

“We know there are plenty of young women keen to get involved in the sport and we hope with programs like this, we are able to encourage them to take that next step.”

Last year the Monash Motorsport team was led by Jenny Kwong while she competed a double degree in science and mechanical engineering. She hoped to one day be involved in the Dakar Rally as an engineer.

Professor Chris Davies, President, Academic Board and Head, Mechanical and Aerospace Engineering
at Monash University agreed it was an important development for student development.

“We are excited about the prospects offered by this partnership, in encouraging young women to take up STEM, and contributing to the industry experience to our programs,” he said.

The ‘Motorsport Experience’ program will begin in early 2018 and run until at least 2022.

Monash is one of only two Australian teams that builds two competition vehicles – one of which is electric – as a single team. The other team is from Queensland.

The Monash team is comprised of undergraduates from a range of faculties, including engineering, commerce, science and law, each contributing to the technical and management aspects of competing in motorsport.

Since 2000 the Monash Motorsport Team has designed, manufactured and tested open wheeled formula-style race cars to compete in the world’s largest engineering design competition – formula SAE. Monash Motorsports won the Australasian university-based competition, FSAE Australasia, from 2009 to 2016, coming third in the 2017 competition. The competition is divided into dynamic (acceleration, skid pad, autocross, fuel economy and endurance) and static (design cost and business presentation) events to test student skills in engineering, design, component manufacture and business. The team also competes internationally and for two years was ranked second in the world.

The Confederation of Australian Motor Sport Limited (CAMS) has been the custodian of motor sport in Australia since 1953.

CAMS is the National Sporting Authority (ASN) for motor sport in Australia, delegated this responsibility by the Federation Internationale de’l Automobile (FIA).

The FIA aims to ensure that motor sport is conducted in accordance with the highest standards of safety, fairness and social responsibility and CAMS, together with in excess of 120 other ASNs in over 100 nations, are committed to carrying out the mission of the FIA.