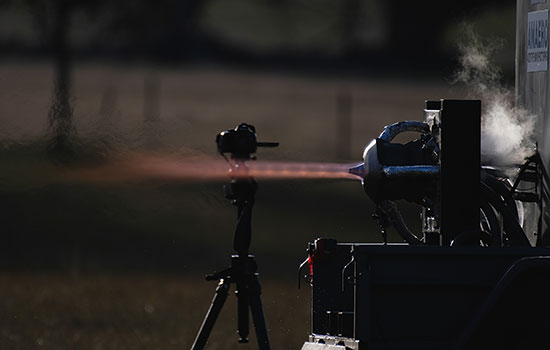 The new rocket engine is a unique multi-chamber aerospike design which turns the traditional engine shape inside out.

Two years ago, Monash University researchers and their partners were the first in the world to print a jet engine, based on an existing engine design.

Now the team of engineering researchers has jumped into the Space Age. The team accepted a challenge from Amaero to design a rocket engine. Amaero then printed the design, and the researchers test-fired it, all in just four months.

The joint achievement illustrates the potential of additive manufacturing (or 3D printing) for Australian industry.

The Monash engineers have now created a new venture, NextAero, to take their concepts to the global aerospace industry, starting with the International Astronautical Congress in Adelaide 25-29 September.

“Traditional bell-shaped rockets, as seen on the Space Shuttle, work at peak efficiency at ground level,’’ Marten Jurg, an engineer with Amaero, said.

‘’As they climb the flame spreads out reducing thrust. The aerospike design maintains its efficiency but is very hard to build using traditional technology.”

Using additive manufacturing we can create complex designs, print them, test them, tweak them, and reprint them in days instead of months”.

Access to Amaero’s 3D-printing expertise enabled NextAero to play to its strengths.

“We were able to focus on the features that boost the engine’s performance, including the nozzle geometry and the embedded cooling network.

‘’These are normally balanced against the need to consider how on earth someone is going to manufacture such a complex piece of equipment. Not so with additive manufacturing.’’

“Going from concept to testing in just four months is an amazing achievement,” Professor Nick Birbilis, head of the Material Science and Engineering Department at Monash University, said.

“It illustrates what’s possible for research and industry. Through our spin-out company, Amaero, Australian companies can design, print, and test metal components for everything from aerospace to surgical instruments, hose fittings to air conditioning parts.”

“Victoria is the nation’s home of manufacturing and this exciting collaboration demonstrates the endless possibilities that additive manufacturing offers. The Victorian Government will continue to back manufacturers so they can innovate and capture high-value opportunities, and bring more projects like this one to life.”

The development of the aerospike rocket was supported by Monash University, Amaero Engineering, and Woodside Energy through the Woodside Innovation Centre at Monash.