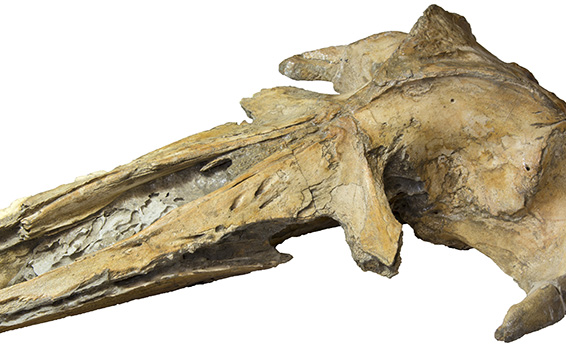 A new study led by a Monash biologist has provided fresh information on the origin of one of the major baleen whale lineages, which helps to connect living whales with their deep evolutionary past.

The new whale (Tiucetus rosae) bridges the gap between a family known as cetotheriids – today represented by the living pygmy right whale – and a poorly understood group of ancient whales living 10 to  25 million years ago.

“Tiucetus sheds light on what kind of animal cetotheriids, and thus one of the major modern baleen whale lineages, evolved from,” said lead study author Dr Felix Marx from the Monash School of Biological Sciences.

“We know from DNA and morphological studies how the living baleen whale families relate to each other, but the looks and whereabouts of their earliest ancestors remain largely in the dark.

“Our new whale is starting to change that, by filling in the blanks at the base of Cetotheriidae.”

The Peruvian whale fossil was found, collected and prepared by the study’s French co-author, Dr Christian de Muizon.  Dr Marx is an expert on baleen whale evolution and was invited to describe and analyse the new specimen. His study, published in Royal Open Society Science, is part of an ongoing research program involving scientists from Peru and several countries in Europe.

There are four families of baleen whale in the modern ocean - 10 to 25 million years ago, the ocean looked rather different, and was dominated by a group of archaic whales scientists still know very little about, according to Dr Marx.

“It is generally thought that these ancient whales belong to one or more of the living families, but they are so different from their modern cousins that no one is quite sure where they fit,” he said.

“Our new fossil superficially looks like an archaic species, but also shares some very clear traits with Cetotheriidae. ­

The research team studied the shape of its bones in detail, and compared it to a broad variety of living and extinct species. Every comparison they made resulted in clear differences with known whales, which meant that the fossil represented a new species.

The full study can be read here.