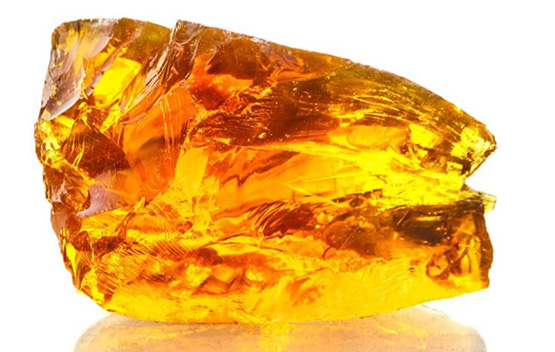 A scientific analysis of fossilised tree resin has caused a rethink of Australia’s prehistoric ecosystem, and could pave the way to recovering more preserved palaeobiological artefacts from the time of dinosaurs or prehistoric mammals.

In a project that could be straight out of Jurassic Park, Monash University researchers and collaborators from the Deakin Institute of Frontier Materials (IFM) used nuclear magnetic resonance to investigate the make-up of 52 to 40-million-year-old amber samples recovered from sites in Anglesea, Victoria, and Strahan, Tasmania.

Study lead author, Andrew Coward, an Honours student from the Monash School of Earth, Atmosphere and Environment, said the amber captured a period in time during the Eocene Epoch (56 to 33.9 million years ago).

“This is an unparalleled method of preservation, and provides insights into past organisms, ecosystems and environments,” said Mr Coward.

Amber, also called resinite or fossilised resin, is organic material created through the fossilisation of the resins of seed plants.

“Our collaboration aimed to identify the original plant sources of amber at Anglesea and Strahan and to establish the way they degraded during their tens of millions of years underground,” said co-researcher Associate Professor Jeffrey Stilwell, also from the Monash School of Earth, Atmosphere and Environment.

Project collaborator Dr Luke O’Dell from IFM said this degradation could potentially have a major impact on the preserved palaeobiological information contained within the samples, and the sort of information we can recover about Earth’s ancient past.

By measuring how each sample absorbed and re-emitted electromagnetic radiation, Dr O’Dell, was able to probe the physical and chemical properties of the amber and identify distinct botanical sources.

“Nuclear magnetic resonance turned out to be extremely useful as it provided us with a unique fingerprint of the chemical structure of each piece of amber,” Associate Professor Stilwell said.

“This study, sponsored by the Australian Research Council Discovery Projects scheme (led by Stilwell), could represent the first unambiguous discovery of indigenous Class II amber in Australia,” he said.

“Amber can be separated into different classes based on which plants it came from, and the discovery of Class II amber from the Anglesea site could mean certain prehistoric plants capable of producing cadinene-based amber were native to Australia during the Eocene Epoch, which is something that has never been proven due to their absence from the fossil record.

“Another possibility is that there may even be an entirely new, previously unidentified botanical source capable of exuding cadinene resins.”

Associate Professor Stilwell said other outcomes of the study had important implications for the field of amber prospecting, by demonstrating how even visually altered amber could still be used to recover valid palaeobotanical and palaeobiological data.

Of particular note was the amount of amber that showed no significant chemical changes despite being extensively visibly altered during millions of years beneath the earth, suggesting such samples could still have preserved intact palaeobiological and palaeoenvironmental information.

Understanding which factors and reactions influence amber as it degrades and how this impacts stored biochemical information could make it much easier for the future collection of amber with intact palaeobiological data.

Dr O’Dell said the discovery was even more significant due to Australia’s sparse amber record.

“While there have been recent reports of amber stretching back 100 million years to the mid-Cretaceous period, the largest known deposits of Australian amber come from the Latrobe Valley coal measures in Victoria and are roughly 3 million to 23 million years old,” he said.

All amber samples that remained after IFM’s analysis are now being housed with Museums Victoria.

The project’s full findings ‘Taphonomy and chemotaxonomy of Eocene amber from southeastern Australia’ have been accepted for publication in the Organic Geochemistry journal.