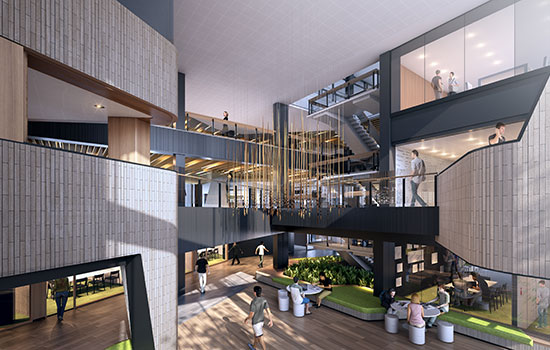 Architect's impression of the Matheson Library

After many years of planning, design and research, the redevelopment enhances the library’s role as a hub of learning and research in social and political sciences, arts, education, business and economics for both the university and wider community to enjoy.

Originally opened in 1964, the library now covers 12,480 square metres and houses over 1.5 million items, including a number of special collections. The redeveloped library provides an overall increase of seating of 25 per cent to 1,500.

Lead architect, Andrew Hayes from Cox Architecture said the library had been reimagined as a habitat for students with more places to collaborate, places to concentrate and places to learn.

"The rare books and art collections of the library are on display through a new internal street which makes finding your way more intuitive and connects the different buildings. All of the levels are connected by a three storey void at the centre with views to the new library courtyard and old oak tree. New window bays bring in more natural light and views out to the broader campus," he said.

The Matheson Library has a strong connection with Cambodia, hosting a large and unique array of Cambodian film collections, documents, photographs and books donated by the late King Father Norodom Sihanouk of Cambodia.

The Matheson Library is one of seven libraries on the Australian campuses. Over half of the physical collection, including several special collections, is held at the library, and over 8,000 visitors per day come through its doors during semester.