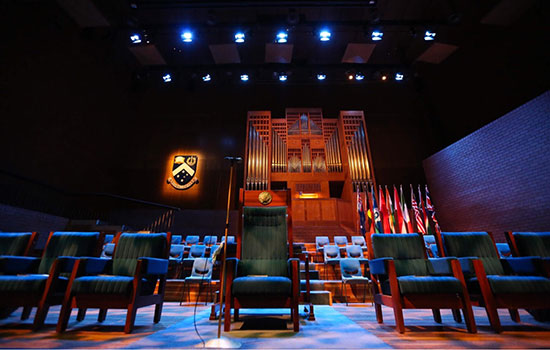 Eminent leaders across industry, the environment and the community have been recognised with Honorary Doctorates in separate graduation ceremonies at Monash University.

The Honorary degree of Doctor of Laws honoris causa was conferred by the University on seven eminent individuals in recognition of their exceptional contribution to the community.

Monash University President and Vice-Chancellor, Professor Margaret Gardner AO, commended this year’s Honorary graduands for their contributions to the community.

“Honorary Doctorates are not bestowed lightly and Monash awards them only to those individuals whose accomplishments are truly exceptional,” Professor Gardner said.

“These seven eminent individuals have brought tremendous benefit to industry, the environment and to the community and I am delighted to award them with the University’s highest honour.”

Those awarded Honorary Doctorates include:

While at Monash, Professor Byrne established a new campus in Suzhou, China and fostered a major alliance with the University of Warwick in the UK. During his tenure, Monash’s position in the global university rankings rose into the top 100 internationally for the first time.

Professor Lyn Beazley is a renowned neuroscientist who forged a successful career at The University of Western Australia after graduating from Oxford and Edinburgh Universities.

As Chief Scientist of Western Australia from 2006 to 2013, Professor Beazley advised the Western Australian Government on science, innovation and technology. She was awarded Officer of the Order of Australia in 2009 and was named the WA Australian of the Year for 2015.

Professor Beazley is a long-term member of the Monash University Advisory Board.

Professor Cherny studied medicine at Monash University Medical School where he graduated in 1983 before completing his Fellowship of the Royal Australian College of Physicians, attaining specialist recognition in both Oncology and Palliative Medicine.

Professor Cherny helped establish the European Society for Medical Oncology (ESMO) Palliative Care Working Group in 1999, which he chaired from 2008 to 2013. He led the ESMO initiative to develop policies on the role of the oncologist in palliative care, oncology training for medical oncologists and minimal standards for palliative care in cancer centres.

Cheryl Batagol is Chairman at the Environment Protection Authority (EPA) Victoria and Chair of the Cooperative Research Centre for Water Sensitive Cities based at Monash University.

Prior to her appointment as EPA Victoria’s Chairman, Ms Batagol was the Chairman of Melbourne Water for five years. She has also served on the Boards of the Victorian Catchment Management Council, City West Water and Southern Rural Water.

Prior to becoming Chief Scientist, Dr Finkel was the eighth Chancellor of Monash University and the eighth President of the Australian Academy of Technology and Engineering (ATSE). In 2016 he was honored with being named Victorian of the Year.

A winner of the Clunies Ross Award for facilitating international neuroscience research, Dr Finkel co-founded Cosmos Magazine and led the development and implementation of the Science and Technology Education Leveraging Relevance (STELR) program for secondary school science, which has been adopted in nearly 500 Australian schools.

Professor Blouin is the Dean and Vaughn and Nancy Bryson Distinguished Professor of the UNC Eshelman School of Pharmacy at the University of North Carolina.

Dean Blouin also serves as the Director of the Eshelman Institute for Innovation that was created to pursue high-risk, high-reward ideas that advance innovation in education, research, and healthcare.

Dean Blouin’s research interests include studying the effect of disease and altered physiologic status on the pharmacokinetics and pharmacodynamics of drugs.

Betty Amsden AO was one of Victoria’s most visible and vocal advocates for philanthropy. She developed giving programs and foundations at the Arts Centre Melbourne, Polyglot Children’s Theatre, 3MBS, the RSPCA, Guide Dogs Victoria, the Melbourne Recital Centre and the Australian Ballet Centre. She also established the Princeton Private Hospital in Camberwell in 1964.

Miss Amsden’s passion about using her skills and expertise to mentor younger generations has lived on in her generous donation to Monash University funded scholarships for 25 Betty Amsden AO Monash Mentor Leaders over five years. For her service to the community as a philanthropist, Miss Amsden was honoured with the Order of Australia Medal (OAM) in 2002, Officer of the Order of Australia (AO) in 2014, received the Melbourne Award for Community Service by an individual in 2010 and was inducted in the Victorian Honour Roll of Women in 2012.