By Leonardo Guida and Richard Reina 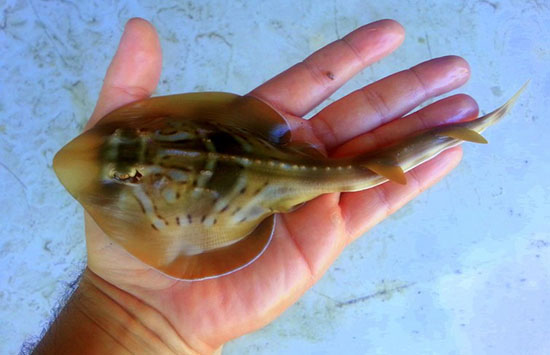 Rays are among the species most vulnerable to overfishing and are often caught incidentally in commercial trawlers and released as unwanted bycatch.

Unfortunately, we’re probably underestimating the impact that fishing is having on ray populations. Although some will survive capture, we know little about the non-lethal and long-term effects of that stressful experience.

Included in those unknowns are questions relating to reproduction. In particular, what if the captured ray was pregnant? Would she still give birth? If she did, would her offspring survive?

Our latest research shows capture stress can reduce a mother ray’s body condition, and also affects the health of her offspring – in much the same way that stress during pregnancy can affect humans.

This research focused on the southern fiddler ray (Trygonorrhina dumerilii), also known as the “banjo shark”, a species common in the coastal waters of southern Australia.

Beyond just this species, our results suggest it’s possible that other ray and shark species that have live-birth (including most large sharks) could be similarly affected.

All rays give birth to live young. For many species pregnancy lasts about a year, making them more likely to be captured during reproduction compared to egg-laying species.

Pregnant southern fiddler rays were collected by hand in Swan Bay, Victoria, Australia, using SCUBA to minimise stress during collection. They were transported and housed in our “maternity ward” – a large outdoor research facility located nearby.

Our maternity ward included a large tank equipped with a giant paddle that pushed water past stationary nets, thereby simulating a trawl net being dragged by a boat. Rays were placed in these nets and trawled, followed immediately by 30 minutes of air exposure to replicate the process of sorting the catch on board a boat. A similar number of control females were kept in a separate tank and were not subjected to trawling or air-exposure.

Over the next three months, pregnancy and the health of each mother was regularly monitored via ultrasounds, blood-sampling and weighing. At birth, their pups were also measured for length, weight and had their blood sampled. Mothers carried and gave birth to an average of two pups.

It’s tough out there for the little guy

In most animals undersized offspring generally have a lower chance of survival. Marine predators are often restricted in their options of potential prey by the size of their mouth, with smaller animals more easily consumed.

Lower body mass may mean pups have fewer energy reserves - in the form of an internal yolk sac - to rely on. An increased risk of starvation is possible during the early stages of life when inexperience can make catching prey difficult.

Pups from trawled mothers also showed signs of a stress response in their immune system, and increased vulnerability to infection and disease is possible. The increased energy needed to maintain a healthy immune system may also limit growth rates. This is important for female fertility because larger females tend to carry more offspring.

Mum feels the stress too

Reduced body condition after giving birth could mean that the next mating event may be delayed or missed in order to rebuild sufficient energy stores for a successful pregnancy.

Delaying or missing mating opportunities could be particularly important for other live-bearing species like the scalloped hammerhead (Sphyrna lewini) and sharpnose sharks (Rhizoprionodon taylori), which mate again shortly after giving birth.

The bigger picture - fishing for the future

Regarding reproduction, it may mean that we can better assess and manage fishing practices in areas where sharks and rays are known to congregate and breed. Fishing techniques that reduce the amount of accidental capture of rays and sharks will benefit both fishermen and conservation efforts, especially during vulnerable breeding periods.

For example, “turtle exclusion devices” in trawl nets (originally designed to prevent the capture of sea turtles) allow animals that are much bigger than the target catch to escape through a chute. Such a device may be suitable for reducing shark and ray bycatch too.

Our study into how capture affected pregnancy in rays is part of a larger research program led by Monash University in collaboration with Flinders University, University of Tasmania and the Victorian Marine Science Consortium. The research program’s results on both lethal and non-lethal outcomes of capture have helped inform the Australian Fisheries Management Authority (AFMA) how to fish for the future and improve the conservation of sharks and rays.