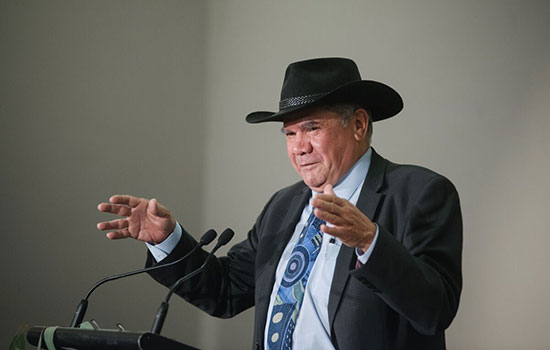 Eminent Australian, Professor and Vice-Chancellor’s Professorial Fellow at Monash University, Mick Dodson AM, gave the Annual Reconciliation Lecture at the Melbourne Town Hall on 18 May.

Below is an extract from the lecture.

“I think pending the establishment of an inclusive Australian Republic we should bring our constitution alive. It has to become a living document for us.

At its foundation, the Australian Constitution as it stands is an exclusionary document for Australia’s Indigenous peoples.

The Referendum in 1967 demonstrated that there is a deep desire for a sense of inclusion in Australian society that many Indigenous people still hold high as the pinnacle of reconciliation in Australia. But unfortunately it has not delivered equality for First Nation peoples.

Up until 1967 the Constitution had exclusion at its base.

The changes to the Constitution allowed the Commonwealth government to pass laws that could be used specifically for Indigenous peoples, but there was, and is, no guarantee that such laws will be beneficial. Indeed the High Court has made it clear that the Commonwealth parliament post 1967 can pass special laws which can benefit or discriminate negatively toward Indigenous Australians.

We witnessed this during the NT Intervention where this power was used not only to discriminate against us but to also actually suspend the operation of the RDA.

The Constitution remains relevant to Indigenous people as theunfinished business of our times, and arguably as the shared unfinished business of the nation as a whole. It gives us a potential for renegotiation of the relationship between Indigenous peoples, as the first self-governing peoples of this continent, to reconcile politically and spiritually with the Australian people and develop a shared sense of national identity.

We also need to be brave, come with a good heart and trust each other. We own our Constitution and we should take charge of it.

The full speech will be screened on Wednesday 31 May at the Northern Plaza, Monash University, Clayton.