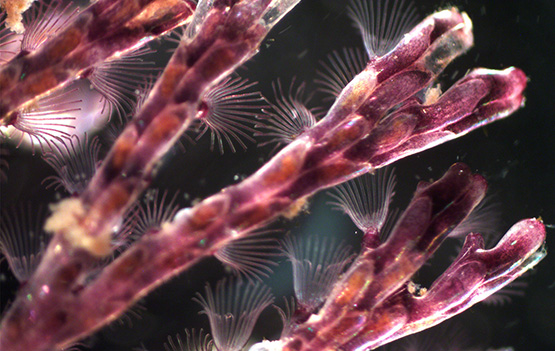 A colonial marine invertebrate Bugula neritina, used as a model organism by researchers within the Centre for Geometric Biology. Photo credit: Amy Hooper

Monash scientists have uncovered new and surprising discoveries about how organisms can regulate energy use when their numbers increase.

The research was led by the Monash Centre for Geometric Biology in the School of Biological Sciences and published recently in the journal Ecology.

Researchers in the Centre tackle the fundamental question of why organisms grow the size they do. Understanding how individuals grow and regulate their energy is critical in helping scientists predict how large-scale impacts, such as climate change, affect populations of organisms.

“Organisms are often smaller when population numbers are greater and until now we have always assumed that this was purely because there was less food available for each individual,” said one of the study’s co-authors Centre Director Professor Dustin Marshall.

In order to better understand the consequences of increasing population numbers on the growth of organisms, the research team looked at energy use in two systems: phytoplankton and marine invertebrates.

“There have been very few studies that look at both energy-in and energy-out at the same time,” explained lead authors Dr Giulia Ghedini and Dr Martino Malerba, also from the Centre for Geometric Biology.

Researchers at the Centre work on a range of different organisms and biological systems including microbes, unicellular algae, invertebrates and fish, to help understand how the size and shape of individuals, populations and even communities can affect energy acquisition and loss.

“Our results suggest that organisms are able to adapt to different population densities by adjusting their energy consumptions,” said Dr Malerba.

“If you are competing for limiting resources with lots of other organisms it is best to minimise your energy requirements,” added Dr Ghedini

The full papers can be read here and here .