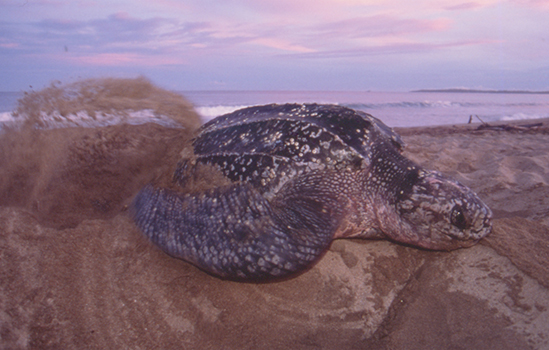 A 20-year study on the hatchling habits of the leatherback turtle has concluded with a call for further research after scientists were unable to attribute dwindling numbers to climate change.

The study, which has just been published in Royal Society Open Science, focused on the influence of climate on embryo development and falling hatchling success in a leatherback sea turtle colony on the island of St Croix in the Caribbean from 1990 to 2010.

“Hatching success dropped from 74 per cent to 55 per cent during the period, but there were no recorded changes in local temperatures and rain levels which explain the decrease,” said study co-author, Associate Professor Richard Reina, from the Monash University School of Biological Sciences.

In northwest Costa Rica, drier and warmer conditions have been shown to increase leatherback egg and hatchling mortality.

The latest study analysed detailed temperature and precipitation data from three nests at the Sandy Point National Wildlife Reserve in the Caribbean.

“Increases in temperature and changes in rainfall patterns do affect the nests but we’re not convinced that these are the only reasons for declining hatching rates,” Associate Professor Reina said.

“To complicate the issue, while we’re seeing a decrease in hatchlings we are also seeing an increase in the size of the adult sea turtle population,” he said.

Data for this study was collected at the Wildlife Reserve during the leatherback turtle nesting season (April–August) each year between 1990 and 2010.

Nightly beach patrols were conducted during the monitoring period on an hourly basis to locate and identify female turtles during nesting.

Returning females (those which had nested at least once in a previous season) were identified by flipper and/or passive integrated transponder (PIT) tags previously applied.

Females without tags were recorded and tagged for identification in subsequent years.

“Our findings suggest that further research is needed to determine the reasons for the regional decline of hatchling numbers in this area of the Caribbean,” Associate Professor Reina said.

“Continued monitoring of hatchling output and observation of trends in climate variables at this site would greatly assist in the early identification of potentially detrimental changes,” he said.