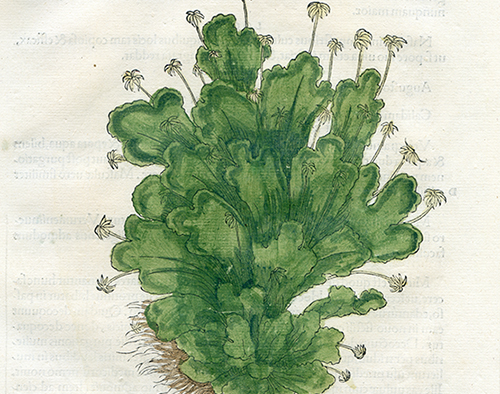 For most people, the simple liverwort, a moss-like shrub, is a common garden pest that thrives in damp conditions. But for Professor John Bowman from the Monash School of Biological Sciences, the liverwort could hold the key to how plants evolved.

Professor Bowman’s lab studies the Marchantia polymorpha a common, easily cultivated liverwort that shows many primitive characteristics of both liverworts and land plants.

In a recent study published in the prestigious Cell journal researchers found that liverworts retain a larger suite of ancestral land plant characters than any other extant land plant lineage.

M. polymorpha has been widely studied by researchers in physiology, anatomy, and genetics and is included as the exemplar in most phylogenetic analyses of land plants.

The origin of a land flora was a major evolutionary event in earth’s history, dramatically changing geochemical cycles and altering the evolutionary trajectories of other populations, such as animals.

“There would be little animal life on land without the evolution of land plants,” Professor Bowman said.

“Land plants evolved from an ancestral freshwater charophycean alga from which they inherited numerous developmental, biochemical, and cell biological features,” he said.

However, fossils assigned to liverworts predate those described as either mosses or hornworts, and evidence from systematics and phylogenetic studies suggest that the first plants colonizing terrestrial environments possessed attributes of liverworts.

“The retention of an ancestral regulatory genome in liverworts is the consequence of not undergoing whole genome duplications, which are common in most other land plant lineages, possibly as a consequence of evolving dimorphic sex chromosomes early in the liverwort lineage.

"The simplicity of the genome and the ease of genetic manipulation is making Marchantia polymorpha an excellent model in which to address fundamental questions in land plant biology."

The project was a community-sequencing project with much of the sequencing done by the Joint Genome Institute (US Department of Energy) followed by genome analysis by a network of around 100 scientists from around the world with various interests.