Tycho’s supernova parents, not so hot or bright, study finds 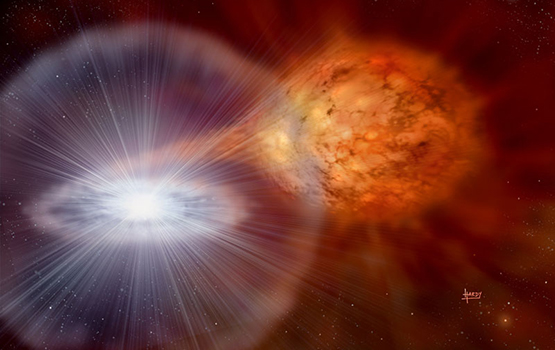 International research led by a Monash researcher has shed new light on the origins of the famous Tycho’s supernova.

The research, published in the prestigious journal Nature Astronomy, debunks the current view that Tycho’s supernova originated from a slowly growing dead star.

“Brighter than Venus when it first appeared, it faded over the following year,” he said.

“Tycho proved that it was not some atmospheric phenomenon, but a genuine change in the night sky.”

This was the first definitive proof that the Universe is not static, as was thought at the time. The Universe changes and evolves, often violently.

Today, we know that Tycho’s discovery was a type of supernova, which astronomers call ‘Type Ia’.

“Observations of these Type Ia supernovae suggest that they must be the explosions of dead stars (called ‘white dwarfs) — lumps of dense matter left over after stars like our Sun run out of fuel,” Dr Woods said.

“But to this day, scientists still don’t know why some white dwarfs explode.”

The conventional view is that a white dwarf grows until it explodes by slowly stealing matter from a gravitationally-bound companion star. This process would make the white dwarf very bright, but also very hot, radiating all of its light in the extreme ultra-violet (UV).

“We know that the edge of the expanding shock wave from Tycho’s supernova emits a very particular shade of red, produced by the shock slamming into neutral, non-ionized hydrogen,” Dr Woods said.

“In our work, we demonstrate that this tell-tale emission would not exist if the ‘parents’ of Tycho’s supernova were hot and luminous in the manner predicted by the conventional scenario,” he said.

“Our result provides a benchmark against which all future models of Type Ia supernovae must be compared,” he said.

“Our test can also be applied to the remnants of other nearby supernovae to determine whether the accretion model could work in more unusual cases.”