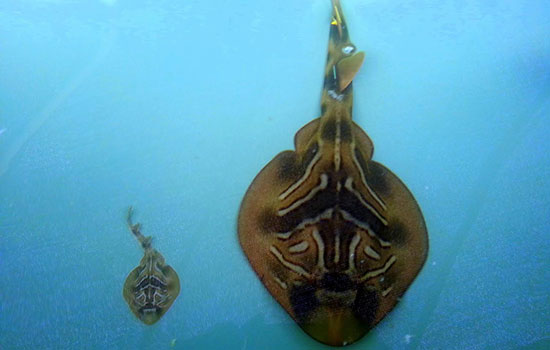 The stress of unintentional fishing capture has a detrimental impact not only on pregnant rays, but also their unborn offspring, research that is the first of its kind in the world has found.

The study, led by graduating Monash Science PhD candidate Leonardo Guida, was recently published in Scientific Reports. The research formed part of his PhD thesis, as part of a Monash University-led broader research program in collaboration with Flinders University, University of Tasmania, and the Victorian Marine Science Consortium.

“Prior studies have primarily focused on how  the stress of fishing capture affects mortality rates, so the non-lethal effects of capture stress are largely unknown, but are very important” Leonardo said.

“Our results show that capture of pregnant fiddler rays can influence their reproductive potential and negatively affect the health and fitness of their babies.”

“Based on our results, it’s likely that other ray and shark species that have live-birth are likely to be similarly affected.  They are probably more sensitive than egg-laying species”

In the laboratory, the researchers mimicked trawl capture followed by a brief period of air exposure, similar to typical commercial fishing practices. Following the trawling, mothers were regularly monitored via ultrasounds, blood sampling and changes in body weight until they gave birth – much the same way human pregnancy is monitored. At birth, the size and health of the offspring were measured.

They found that offspring born from trawled mothers were not only smaller in length and lighter in weight, but their immune system showed a stress-response. Mothers who were trawled were also lighter in weight compared to their unstressed counterparts. The consequences of the stress could affect offspring survival and growth, and also future pregnancy.

“The study has major implications for the way we estimate the impact fisheries has on shark and ray populations. Using this information we work towards more efficient fishing practices that improve the conservation outcomes for these important and iconic marine species,” said research program leader and study co-author Associate Professor Richard Reina.

Leonardo highlighted that “The populations of many ray species have been markedly reduced, so it’s critically important that we raise awareness about such beautiful and misunderstood animals before it’s too late.”