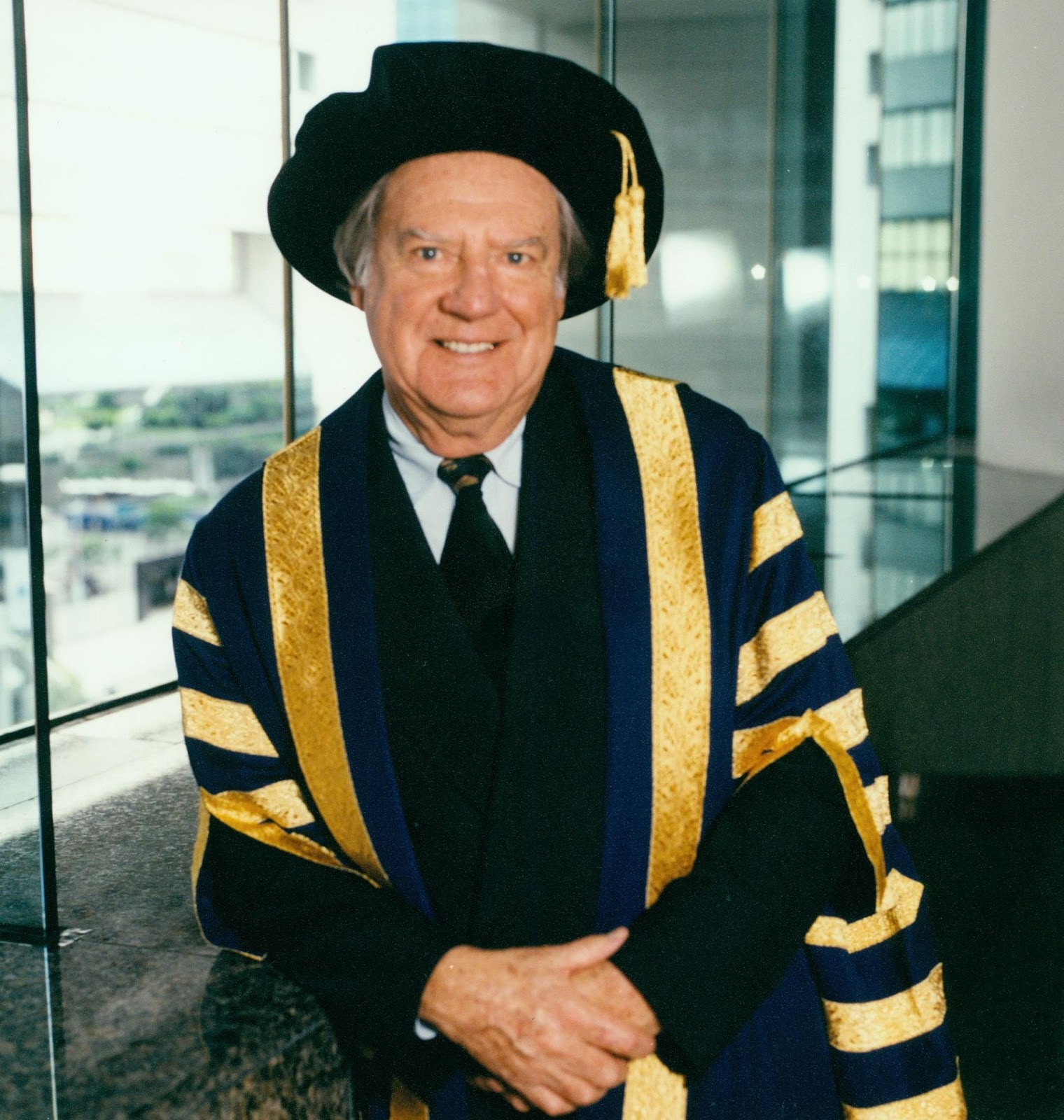 As a child, he would stare at the intricate, brilliant-coloured chalk maps of America drawn by a teacher and be fascinated. The young Mal had never seen anything like them; not only did they unfold before him a larger world, but they also set him on a voyage into his own heart. It was those maps which triggered a love of art and a deep fascination with the boundaries of space, which later was to influence much of his work as an academic. They showed him a world beyond the bush and he was hooked.

Professor Logan’s appointment as the fourth Vice-Chancellor of Monash (and first President) in 1987 marked the most dramatic expansion in the history of Australian universities, involving a decade of frenetic mergers, commercialisation and entrepreneurialism. He brought with him to the post all the questions from his past. How could you make education more equitable? Why were so many parts of the world poorer than others? How can you lift people out of poverty? He was, according to the former Dean of Law, the late Emeritus Professor Louis Waller AO, a “universalist” who was also “very, very Australian”.

Mal was Monash’s first Vice-Chancellor to be educated at government schools and rural university colleges. Neither had he come from a sandstone university, instead learning his craft first as a teacher and then as a lecturer in the less hallowed halls of a regional university and a teachers’ training college.

Under his leadership, Monash underwent a radical transformation, stepping out from the shadows of the University of Melbourne and emerging into the gleaming light of new world education; multi-national, multi-campus and multi-cultured. As the architect of Melbourne’s first mega-university, Mal watched it mushroom from one campus with fewer than 15,000 students to six campuses spread across Victoria with more than 41,000 students.

Mal wholly embraced the vision outlined in the influential 1985 British Jarratt Report of a thoroughly modern Vice-Chancellor, one that was a corporate leader as well as an academic. His far-reaching vision owed a large debt to his Presbyterian Scottish forebears whose spirit had filtered down the generations, impressing on him the belief that education was freedom. His own struggle to achieve this, often having to cycle a fourteen-mile round trip through inclement weather just to get to school, only deepened his conviction.

Born in the winter of 1931, he and his brother Noel’s early life revolved around church and education. After leaving Tamworth High School, Mal won a teacher studentship at the University of New England, completing an honours year at the University of Sydney. After graduating he began teaching at the Forbes High School in the far west of NSW, where his evenings were spent drinking in the pub with his fellow rookies. It was, he said on reflection, “a terrible life in many ways.” Salvation came when he took a job as a lecturer at the local teachers’ college in Armidale, and found that he liked it.

So much so, that in 1959 he accepted a position as lecturer in geography at Sydney University, where he also undertook a PhD, awarded in 1965. But his restless gaze was on new horizons. In 1968 he left for the US so that he could take up a post at the University of Wisconsin as Professor of Geography and Urban and Regional Planning, lured by the American model which combined democratic access with research excellence.

In 1971 he was on a visiting appointment as a Rockefeller Foundation Professor at the University of Ibadan in Nigeria when he received on a broken, crackling phone line the offer of a professorship at Monash. He and his wife, Toni, a fellow teacher whom he had met in Sydney, had a two-year-old daughter, Kate, and the prospect of living in Australia again was attractive. Monash, he felt, had “warts all over it” but it was a place where he could make a difference.

As a lecturer he was, according to his students, “high quality,’’ someone who “really knew his stuff and was engaged by it.” With his larrikin charm complementing a sharp, inquiring mind, he quickly scaled the administrative hierarchy, becoming part-time Pro Vice-Chancellor in 1982 then Deputy Vice-Chancellor almost four years later. In 1987 he landed the top job, taking over from the late Emeritus Professor Ray Martin AO.

Professor Logan felt strongly that it was important for universities to be seen as servants of society rather than ivory towers inhabited by introspective academics. Prompted by the controversial reforms of the late 1980s which revolutionised the higher education sector, Mal the geographer set off exploring new frontiers.

In 1987, he was an invited member of the “purple circle” – a group formed by the then Federal Minister for Employment, Education and Training, John Dawkins, to create a sounding board for his ambitious plans for higher education, which became the Dawkins Revolution that created the current Australian higher education landscape.

Professor Logan was not alone in his belief that universities needed to view themselves as part of a wider community, with research driving the engine of change. Other reforms he argued for were institutions’ growing awareness of the needs of both students and employers, strong links between business and universities and increased diversity through the amalgamation of higher education settings.

In 1990 he oversaw the mergers with the Chisholm and Gippsland Institutes, followed in 1992 by Pharmacy at Parkville. The first of many giant steps which loosened Monash from its suburban moorings. A hallmark of Professor Logan’s leadership was the staunch belief that Australia’s future lay in Asia. Internationalisation was the tool he used to shape attitudes towards different cultures and enhance an understanding of society. He strove to establish a Monash teaching presence in the neighbouring regions and created the University's first link with the Sunway Group, a relationship which led to the establishment of the Monash Malaysia Campus in 1998.

Mal was one of the first Australian Vice-Chancellors to recognise that openness and flexibility should become the defining features of the new higher education system. When Open Learning arrived in Australia in 1991, he positioned Monash at the forefront, forming the Open Learning Agency of Australia Pty Ltd (now Open Universities Australia) in late 1992 as a private company to deliver innovative learning opportunities to all parts of Australian society. He once declared the development of Open Learning to be one of his top achievements.

Mal served as a visiting professor or scholar at a number of prestigious universities in Europe and Asia such as the London School of Economics, University of Ibadan, Nigeria, and Nanyang University, Singapore. He wrote, co-authored and co-edited a number of books, reports and papers and was elected a Fellow of the Australian Academy of Social Sciences (FASSA) in 1973. Outside academia, he was active in the World Bank, United Nations and OECD forums, and chaired numerous and diverse committees and boards, including the Australian Centre for Contemporary Art. His artistic vision for Monash led to the creation of the University Gallery and Performing Arts Precinct at Clayton. In 1995 the Logan Research Fellowship scheme was established at Monash to mark his impending retirement and to build on the University’s research reputation.

In 1996 he was appointed a Companion of the Order of Australia (AC) for services to education, business and the arts, particularly through raising international awareness of Australian higher education services and for promoting cooperation between countries.

Upon leaving Monash that same year he was appointed Emeritus Professor and in 1997 was awarded an honorary Doctor of Letters (DLitt).  In 2015 one of the four new student residences established at the Clayton campus was named Logan Hall in his honour.

In later years Mal spent time at his house in the hills outside Nice in the South of France with his wife, Toni, until her death in 2013. During his time at the helm, she actively supported him and took a particular interest in the cultural and artistic life of the University.

When Professor Logan retired he did not bask in his successes. Instead, he acknowledged that the grand sweep of history always puts things in perspective and when viewed through that lens “you are just a little pimple really.”

It was a modest appraisal from a man who was always more interested in the “big picture stuff” than the detail. Asked about his legacy he replied bluntly, “well, we didn’t destroy the place.”  And then he added: “I don’t wake up in the morning and think ‘boy, did I do something there!’ I roll over and go back to sleep.”