Why exploitation and corruption continue to dog Australia’s VET sector 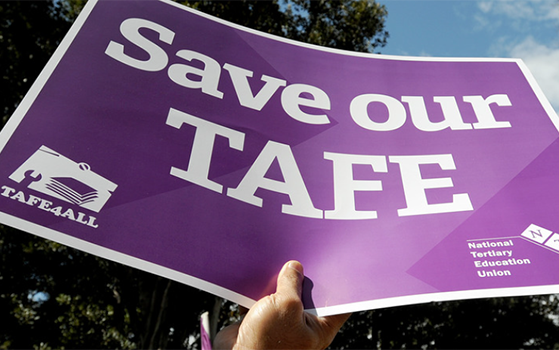 Australia’s VET system has been in an uphill battle with reforms that have led to lower-quality training and misappropriation of resources. Joe Castro/AAP

Victoria’s Independent Broad-based Anti-corruption Commission (IBAC) is currently investigating allegations of serious corruption at TAFE institutes. This is the latest in a series of scandals involving Australia’s vocational education and training (VET) sector.

IBAC’s Operation Lansdowne is probing how TAFEs have become embroiled in corrupt schemes that misappropriated millions of public dollars for training that never occurred. However, this sum is relatively minor compared to other reports from the sector.

In recent history, the VET sector has been beset with money loss, stranded students, and organisations collapsing. Analysis from the Grattan Institute estimates that 40% of the A$3.1 billion in loans paid to training organisations through the federal VET-FEE HELP scheme are likely never to be repaid.

Additionally, the $650 million collapse of the training organisation Vocation is the subject of two separate class actions and numerous investigations, one of which involves a former federal education minister.

Reports of unethical practices have been widespread. In one example, nursing home residents signed up to what they thought was a free, four-day course on how to use Microsoft Word and email. Instead, the training organisation enrolled them in a technical course for IT professionals and received hundreds of thousands of dollars from the government.

Why this is happening

A federal parliamentary inquiry found poor regulation and inadequate oversight as major contributing factors to the ongoing issue of corruption in vocational training. However, there is a need to also consider the certification regime of Australia’s VET sector.

Certification regimes are how authorities ensure the outcomes of an education system is valuable to society.

The media’s use of words like “shonky”, “rorts”, “dodgy” and “shysters” are all indicative of a certification regime that is failing to establish trust in the integrity and validity of the education outcomes it produces.

Australia’s VET sector is structured very differently from secondary and university education. It uses a competency-based system that emphasises outcomes.

This approach was introduced in the 1990s to make the VET system more flexible and responsive. Education inputs, such as the length of study, were viewed as a poor way of measuring the quality of education provision. The system was designed to focus on signalling the presence of knowledge and skills that can be used in the workplace.

In a competency-based system, education can be certified regardless of where it is delivered, how the program is taught, or what assessment is undertaken. This means someone studying for a diploma can take anywhere between one week and two years before receiving their certification. It can be legitimate to be awarded the diploma without submitting a single written assignment.

This is in contrast to a university bachelor degree, which takes a minimum of three years and the submission of assignments totalling tens of thousands of words.

To be an accredited training provider, it is also not mandatory to have a physical presence like a school or campus. This may help explain why one training company claimed $57 million while operating out of a small office above Silly Willy’s $2 shop in Western Sydney.

The promise of competition and devaluing the role of TAFEs

Over the past decade, a series of funding reforms were introduced to the VET sector that stressed the value of competition. There has been significant criticism of these reforms. A review completed for the Victorian government noted:

There has been too much emphasis on increasing both the number of providers and the intensity of the competition between them, and not enough care taken in ensuring they are delivering quality training.

The features of the market reforms, and the certification regime of the VET sector, meant organisations could set up with relatively little investment, provide training of dubious quality, and leave once they had made their money.

In any certification regime, institutions also play an important role in providing quality assurance. Under these reforms, however, TAFEs were particularly hard hit – and the IBAC investigations show just how compromised they became.

Faced with job losses, campus closures and plummeting revenue, the TAFEs were forced to consider riskier arrangements like the ones currently being scrutinised by IBAC.

Rethinking the certification regime of the VET sector

This is not the first time questions have been raised about the quality of training in the VET sector. Almost a decade ago the exploitation of international students was under the microscope. Research from Monash University questioned the VET sector’s ability to produce graduates that matched the competencies being certified.

The repeated scandals in the VET sector show that the certification regime of the VET sector can be vulnerable to unethical practices. Suggestions have been made on how to increase the sector’s resilience. These are good places to start when looking at how to improve the system.

In any year, 26% of 15-to-24-year-olds from lower socioeconomic backgrounds train in the VET sector. It is important to have a system that operates in their interests. Students need to be offered courses that are of high quality and beneficial to them. Government and industry need to have confidence that what is being certified is real and valuable.

A certification regime is based on trust. We need better ways to trust the value and legitimacy of what is being certified in our VET sector.

\Read the original article on The Conversation.