How to talk to humans in a million years

Geologists, social scientists, and even linguists are deciding where, and how, to store nuclear waste.

In 1977, NASA cut a record to launch with the Voyager spacecraft, creating a galactic message in a bottle. Now in deep space, The Voyager’s ‘Golden Record’ includes images and sounds of life on Earth – messages intended for any extra-terrestrial life that may chance on the spacecraft.  The  aluminium cover is etched with instructions for playing the record and a map showing the location of our sun in the universe

Basically, NASA had to work out how to talk to aliens.

Back on Earth, Professor Sandy Cruden, Head of Monash University’s School of Earth, Atmosphere and Environment, is facing the same problem. Except instead of talking to aliens, he wants to talk to humans – one million years in the future. Sandy is working with an international, interdisciplinary team to decide where to bury Canada’s nuclear waste, and deal with the associated long-term safety aspects. The team includes linguistic specialists and psychologists. ‘How do you communicate to some sentient being a million years  from  now that this place is dangerous?’ asks Sandy. ‘The graphic on the Voyager space mission [is] hopefully readable by any form of intelligence. We need the same approach to symbols for a waste repository.’

Globally, nuclear power generation produces about 12,000 tonnes of high-level radioactive waste each year. Most lies in swimming-pool sized storage ponds near nuclear reactor sites. ‘With it just sitting at the surface, everyone acknowledges that this is a short-term solution for managing nuclear  waste,’  says Sandy. ‘So now most countries are considering developing underground waste repositories. These have to be geologically stable, and leak-free for 100,000 to a million years. That’s a very hard technical ask.’

The nuclear waste repositories will be sealed in one or two centuries, and must survive the next glaciation in about 10,000 years. ‘It also has to be impenetrable to any humans around after that.’

Sandy says an interdisciplinary approach is required, involving scientific, technical, and social aspects to keep the waste safe within multiple ‘spheres’. Scientists with nuclear physics expertise have developed various metal canisters that are capable of containing spent fuel rods –  these  form the inner sphere. The next sphere, which holds the canisters, is built by engineers who design structures filled with concrete that can withstand extremely high temperatures and pressures. Around those two spheres of containment is the geological barrier, which is where Sandy’s expertise  comes  in. ‘We’ve been trying to find the best volumes of rock in which to build a facility,’ he says. ‘That volume of rock must have a high degree of integrity in terms of water flow; it must be seismically quiet and unlikely to be affected by earthquakes; it must withstand another glaciation.’  With  a nod to those sentient beings a millennium from now, he adds, ‘and it has to be in a rock that future human beings won’t want to exploit as a mining resource’.

Sandy is no stranger to interdisciplinary cooperation, having been interested in science and art since school. ‘I thought geology was a nice combination of science and more artistic sensibilities,’ he says. As if anticipating my incredulity, he explains, ‘people don’t think of  scientists  looking at rocks as having an artistic sensibility, but it is a common attribute of geologists, who visualise the Earth system in 3D using colourful maps that can be admired on a wall.’

As a student in Scotland interested in skiing, sailing, and mountaineering, Sandy studied geology for the field work, travel, and hands-on approach. His field work has since taken him around the world, including the Arctic, Iceland, Scandinavia, Italy, South America, and the United States, and involves  using  remote sensing to map the Earth from satellites, aircraft, and – more recently – drones and unmanned aerial vehicles (UAVs).

His work on the physical and chemical processes of granite formation in the Earth’s crust, and how it fractures, led to his role advising on the geological barriers around potential nuclear waste repository sites. ‘Granite is one of the most favourable rock types to put repositories in,  as  it is homogenous, hard, and contains very few fractures – and any fractures that do occur are predictable.’

Most of Sandy’s nuclear waste expertise is applied in Canada, where he has worked with a hydrogeologist, geophysicist, geologist, geotechnical engineer and others to help find the best geological locations for nuclear waste repositories.

Kathryn Shaver, from the Canadian Nuclear Waste Management Organization, explains that specialists in many disciplines are involved in this work. ‘These range from technical experts in areas like repository design and construction, safety assessment and environmental sciences to professionals  in  public engagement, social research, Aboriginal Traditional Knowledge, finance and communications.’

She says that while many people focus on the technical aspects of managing used nuclear fuel, there are also many socio-economic issues to consider. ‘Our process for selecting a site is community driven. It is designed to ensure, above all, that the site selected is safe, secure, and has an informed  and  willing host. Early in the site selection process, we encourage communities to consider this project in the context of their long-term interests.’

Kathryn says the implementation of Canada’s plan for used nuclear fuel will unfold over many decades, and they have considered communication with future generations in a general way. ‘Canada is a member of the Nuclear Energy Agency Project on Preservation of Records, Knowledge and Memory  across  Generations,’ she says. ‘We anticipate that permanent markers would be installed to inform future generations of the presence of the sealed repository.’

Kathryn says it is important to interweave Indigenous Knowledge into planning and decision-making processes. ‘Indigenous peoples have a special relationship with the natural environment and unique stewardship responsibilities that come with this relationship,’ she says. ‘The accompanying  First  Nation and Metis peoples’ knowledge brings special understanding to the site selection process. This includes the assessment of safety and community well-being.’ 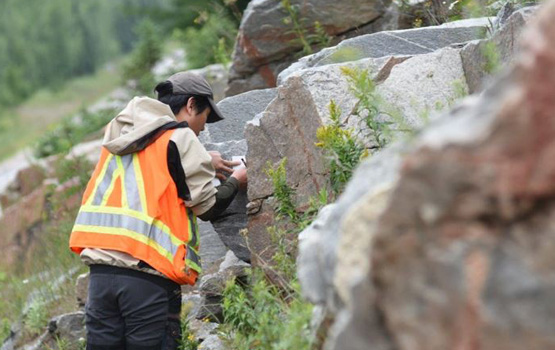 Granite is homogenous, hard, with few fractures, making it a suitable rock type for long term containment of nuclear waste.

Sandy agrees that the Canadians have taken a sensible approach to managing the process of site selection. ‘You could find the best rock possible and spend millions of dollars in planning a repository, only to be told there’s a community who is opposed to it, or a species that is endangered.’

He says an appreciation of the importance of community engagement, economics, policy, and consideration of cultural and social issues alongside a scientific approach is just what students completing the Monash Masters of Environmental Sustainability course will learn. ‘People coming in with a  science  background will get to see other, equally important areas in pressing issues such as waste disposal, mining impacts, forestry, climate, water, biosecurity and other areas. Similarly, students from social science or economics will be exposed to the way that scientists think about environmental  and  technical problems. That’s the spirit of the course: to produce more rounded people who can make better informed decisions about sustainability issues, and be more valuable in the workforce.’

Australia is the world’s largest producer of uranium, but has no nuclear energy industry. While the Australian Nuclear Science and Technology Organisation (ANSTO) has a nuclear reactor at Lucas Heights near Sydney to produce isotopes for research and medicine, the country does not have a single  nuclear  power generator.

‘That’s a missed opportunity,’ says Sandy. ‘We’re burning tonnes of brown coal to generate electricity. If we’re going to be serious about climate change, which we should be, we can’t have fossil fuels providing energy forever. Nuclear energy should be in the  mix,  as it is in most developed nations.’

Sandy thinks that nuclear power will eventually have to be considered as part of Australia’s energy mix. ‘Unless someone cracks nuclear fusion, or comes up with a completely new energy source, Australia will at some point have to look at nuclear energy as an alternative to fossil fuels.  But  this will require a lot of public education and discussion to get community buy in.

Again with a focus on the very long-term, Sandy is optimistic about community acceptance of nuclear power. ‘If someone wanted to try hard in Australia, over a long period of time, it is feasible to convince a majority of people to accept the benefits of nuclear power. But it won’t happen  overnight.’

Interested in sustainable development? Explore the Monash Master in Environment and Sustainability, now enrolling for 2017.