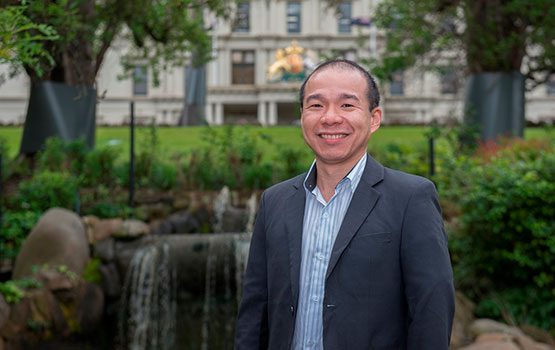 After completing his master’s in the Philippines, Michael Kho Lim was keen to continue his academic career. His idea was underlined at a work meeting at the Australian embassy when he spotted a ‘Study in Australia’ promotional banner.

“It’s calling me,” says Michael “I’d always wanted to do a PhD, and out of the blue I spotted the promotional banner.”

“How can independent filmmakers ensure they earn money from the films they’ve produced in order to create another film in the future?” he says. “Sustaining production is difficult for independent players in the Philippines. Bigger studios have a constant way of earning income, as they’re part of a large machine. It’s a real challenge for independent players and new filmmakers to obtain theatrical releases even after a film has been shown at a film festival.”

Michael set out to research the dynamics of the film distribution system and how it affects industry players by coming to Monash to undertake a PhD. After a year, he transferred to a Monash Warwick Alliance Joint PhD.

“Being exposed to another research culture outside Australia was very attractive to me. The UK has a different approach to Australia, and I wanted to understand as many different research perspectives as I could.”

The other benefit of the Joint PhD was having access to three supervisors. Michael was able to draw on an existing relationship between Professor Justin O’Connor of communications and media studies, based in the School of Media Film and Journalism at Monash, and Associate Professor Jonathan Vickery from the Centre for Cultural and Media Policy Studies at Warwick. He also worked with Monash Associate Professor Therese Davis.

“Throughout my Joint PhD I was able to benefit from all of my professors’ strengths. I found that Professor O’Connor looked at the bigger picture, and Associate Professor Vickery looked more at specifics. This offered me a very rounded approach to my research.”

Michael started his Joint PhD at Monash before travelling to the UK to spend a year at the University of Warwick.

“I lived in accommodation that was managed by Warwick and spent a lot of time with my fellow students. Everyone was very collaborative and engaging,” says Michael. “I was able to meet like-minded people and really enjoyed my time in the UK.”

After successfully completing his Joint PhD, Michael worked as lecturer in communications and media studies at Monash.  This year, he was one of six recipients of a research grant from the National Commission for Culture and the Arts, further enabling him to pursue his passion by examining the “real” state of Philippine cinema over the past six years.

“It will produce a baseline mapping document of the Philippine film industry and will be published as a sectoral report that informs cultural and film policy development in the Philippines.”

Michael was also part of the research team led by Professor O’Connor that co-edited the book Cultural Industries in Shanghai: Policy and Planning inside a Global City, and has recently published his own book, Philippine Cinemas and the Cultural Economy of Distribution, that is now available to purchase.

He’s proud to be one of the first academic researchers to publish on this subject.

“I really want my research to help those in the film industry in the Philippines. The industry hasn’t been explored before, and I’m the very first, academically speaking, to carry out research on film distribution at this level. “