A quarter of kidney donors are living: what you need to know to be a donor 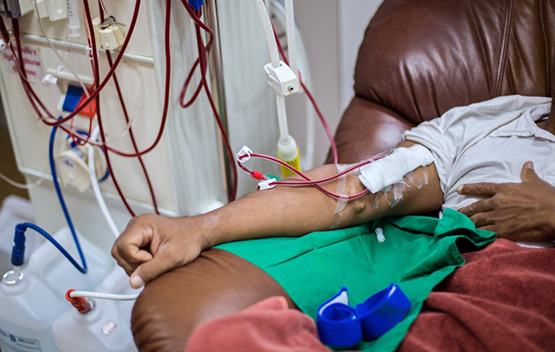 People undergoing dialysis would have a better quality of life if they had a kidney transplant.
from shutterstock.com

At any one time, more than 1,400 Australians are on an organ transplant waiting list. The most common organs in demand are kidneys, followed by the liver and lung.

While the number of deceased organ donors in Australia has doubled since 2009, rates of live donor transplantation – where a person donates one kidney or, rarely, a portion of their liver – are relatively static.

In 2016, 265 Australians donated a kidney to a friend or relative, making up about a quarter of all kidney transplants. Live donor liver transplants are rare (only two occurred in Australia last year) and often donated from a parent to a child.

Who needs a kidney?

Kidneys filter toxins from the blood and regulate fluid balance. When kidneys are functioning so poorly a person needs dialysis to do the work for them, we say the person has “end stage kidney disease”.

Many patients with end stage kidney disease would live longer and have a better quality of life following a kidney transplant compared to staying on dialysis. But the shortage of donor organs means preference is given to those likely to have better outcomes and reasonable life expectancy after transplantation.

Australian guidelines require patients have an 80% likelihood of survival at five years after transplantation to be eligible for the wait list. Tests are done to ensure the potential transplant recipient has acceptable heart health to undergo the operation, and that there are no cancers or infections that will be made worse by medications that suppress the immune system (“anti-rejection drugs”).

The donor’s kidney function is assessed, and the risk of them developing a kidney disease in future is evaluated. This is both to ensure the donor enjoys good kidney function after removal of their kidney, and that the recipient receives a well-functioning kidney. Donors also routinely undergo psychological evaluation.

Kidneys work by filtering out toxins from the blood and regulating a person’s fluid balance.
from shutterstock.com

Where do donors come from?

People often donate organs to their blood relatives, but it’s also possible to give a kidney to someone who is not related, such as a spouse or close friend. Some people use social media to solicit organ donations, and some have been successful. Specific matching sites also exist in countries such as the US, with the aim of getting healthy volunteers to altruistically donate a kidney.

But methods of acquiring a donor who is previously unknown to the recipient are controversial and generally discouraged in Australia for ethical reasons.  In Australia, a person could donate a kidney altruistically to someone on the waiting list. In this situation, the donor and recipient do not find out each other’s identity.

The Australian paired-exchange program allows greater numbers of live donor transplants to occur through paired kidney donor swaps. For example, if Jane’s potential donor  John is unsuitable to give her a kidney because of matching issues, and Bob’s potential donor Barbara is unsuitable to give him a kidney, Barbara can donate a kidney to Jane, and John can donate a kidney to Bob.

Last year, an altruistic donation kicked off a domino chain of six paired-exchange donations, with the final kidney from a paired exchange donor going to a patient on the deceased donor waiting list.

Live donors must be over 18, but it’s preferable if they are over 30 as older age at donation minimises their chance of developing an unexpected condition that threatens their kidney health down the track.

Different people have different combinations of proteins on the surface of their cells that allow the immune system to determine what is part of the body (self) and what are foreign agents (non-self). These proteins are determined by genes called human leukocyte antigens (HLA).

Blood relatives are most likely to donate an organ. from shutterstock.com

Usually people need to be the same blood group to donate a kidney. But some living donor transplants can occur across different blood groups. These are called ABO incompatible transplantation. For this to happen, the recipient must undergo plasmapheresis – a  process in which antibodies (proteins that attack foreign invaders) are removed from their blood and they are given strong medication to suppress the immune system.

Only people with end stage kidney disease can be listed for deceased donor transplantation. But living donor transplants can be “pre-emptive”, taking place before the need for dialysis.

This has advantages, such as not having to take time away from work or study to do dialysis. People who undergo pre-emptive transplantion have a lower risk of death and loss of kidney transplant function compared to people who spend time on dialysis before getting a  transplant.

Are there risks to donors?

Kidney donors usually remain in hospital for a few days after surgery, which is usually conducted as “keyhole surgery”. This involves a camera and instruments being inserted through a small incision and the kidney being pulled out through it.

Full recovery time is around six to eight weeks. Complications, such as bleeding or blood clots, related to the operation are rare. There is a very small risk of death around the time of the operation, estimated at 3.1 in 10,000 donors, or 0.031%. Although the patient populations differ, this is less than for other minor operations such appendicectomy (estimated in a recent study at 0.21%).

There is no long-term increased risk of death or heart disease. Donating a kidney is likely to cause a slight increase in blood pressure over time.

After donation, the remaining kidney increases its capacity to filter blood, and kidney function usually returns to 70-80% of the previous level. This is adequate, and does not result in any symptoms related to kidney disease.

Studies comparing kidney donors to equivalently healthy non-donors found kidney donation increases risk of end stage kidney disease about three- to five-fold. But the risk is very low to begin with (around 0.06% for a white US man and 0.04% for a white US woman).

The kidney donation experience is usually positive. In one study, 95% of kidney donors in the US rated their experience as good to excellent. They reported an improvement in their sense of meaning in life and self-esteem. But a degree of psychological stress related to donation was common, and 20% reported a financial burden.

The Australian government gives A$4.1 million to run the Supporting Living Organ Donors program. This scheme includes reimbursing employers for sick leave for those who donate an organ, as well as other initiatives that aim to remove financial barriers to organ donation.