Antibiotic insight may help in battle against bacterial resistance 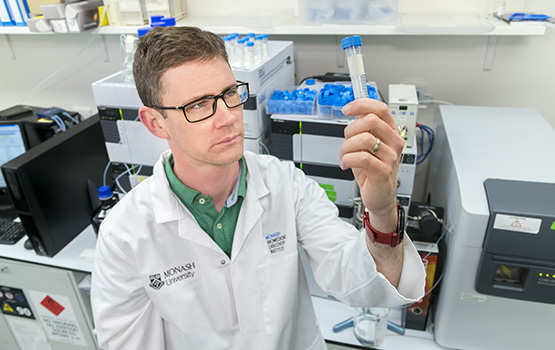 Bacteria or ‘superbugs’ that have adapted to resist multiple antibiotics are responsible for around 700,000 deaths globally a year; new types of antibiotics are urgently needed.

Monash University researchers, as part of an international collaboration, have identified a key part of the process by which a common clinical antibiotic is formed – a finding that could potentially pave the way for novel compounds to tackle the problem of bacterial resistance. Their results were published in Chemical Science last week.

The scientists, led by Monash Biomedicine Discovery Institute’s (BDI) Associate Professor Max Cryle, and Dr Evi Stegmann from the University of Tuebingen, Germany, investigated what are called glycopeptide antibiotics including vancomycin, a drug used as a last resort in treating the dangerous Staphylococcus aureus or ‘Golden Staph’.

Vancomycin is produced naturally by bacteria, biosynthesised by a long “assembly line” process during which various amino acids are linked to form the peptide involved, Associate Professor Cryle said.

“It’s the biosynthesis that produces the compounds we use in the clinic, so to make new compounds we need to understand exactly how this process works,” he said.

“Understanding the details within this process is challenging – this is what’s really held the field back,” he said.

The researchers have identified the point in the assembly line at which a process called halogenation occurs. Halogenation, in this case incorporating the chlorine atom, plays a significant role in the activity of glycopeptide antibiotics. Knowing when and where this occurs means that scientists can manipulate this part of the process and therefore the antibiotic end product.

“This means that we can potentially start to make modified compounds, which is exciting,” Associate Professor Cryle said.

Moreover, whilst vancomycin was used in this case, the finding may apply to other types of antibiotics.

“There are a lot of both existing and new antibiotics that are peptide-based and that are made by the same machinery, so finding out how this works in our system means we can take that knowledge and apply it to all those compounds,” he said.

The highly challenging research was conducted in vitro at Monash BDI and validated in bacteria in Germany. It took more than three years to establish the tools required to conduct it.

The researchers are now working on ways to re-engineer vancomycin-type antibiotics.

In addition to being a Group Leader at the Monash Biomedicine Discovery Institute, Associate Professor Max Cryle is an EMBL Australia Group leader in Victoria, based in the Department of Biochemistry and Molecular Biology at Monash University, and an Associate Investigator in the Australian Research Council Centre of Excellence in Advanced Molecular Imaging.

This research was supported by EMBL Australia, the Centre of Excellence in Advanced Molecular Imaging and was supported under Australian Research Council's Discovery Projects funding scheme.

About the ARC Centre of Excellence in Advanced Molecular Imaging