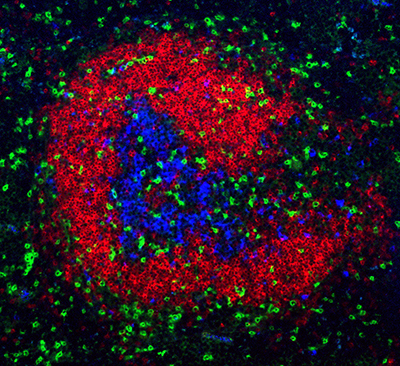 New research has taken us a step closer to finding a cure for human immunodeficiency virus (HIV), as well as other infections including the glandular fever virus, which is associated with the development of lymphoma. Some infections, such as HIV, cannot be cured with antiviral therapy because the virus effectively hides from the immune system.

An international team of scientists, led by Monash Biomedicine Discovery Institute researcher Dr Di Yu, and Dr Axel Kallies from the Walter and Eliza Hall Institute, have discovered that killer T cells, a specialised type of white blood cells, can find these “hidden” infected cells in tissue and destroy them. This discovery, published today in Nature Immunology, could provide new insights into finding a lifelong cure for chronic infections such as HIV.

Dr Yu said this type of killer T cell was naturally found in the body during infection, but their numbers and killing function needed to be boosted to allow them to eradicate chronic infections.

“We’ve shown for the first time that there are specialised killer T cells that can migrate into a part of the lymphoid tissue and control hidden infection,” Dr Yu said.

Although treatments for HIV with antiretroviral drugs are highly effective, treatment is lifelong and there is no cure. Other infections such as Epstein-Barr virus, the cause of glandular fever, may also hide and persist for many years, but become active when the immune system is compromised.

The researchers discovered that these specialised killer T cells, called follicular cytotoxic T cells, can enter hiding spots inside lymphoid tissue, where viruses can hide on treatment. These hiding spots are called B cell follicles.

Dr Yu’s PhD student Mr Yew Ann Leong, who conducted a large portion of the research, also from the Monash Biomedicine Discovery Institute, said that although some infections including HIV could hide within B cell follicles, these killer T cells are specialised to eradicate this hidden virus pool.

“This discovery will help us to design new therapies that could eventually treat many different infections, including HIV,” Mr Leong said.

Dr Axel Kallies, fellow lead researcher on the study from the Walter and Eliza Hall Institute, said he was excited to have co-led this exciting piece of international research.

“The potential of this discovery is huge. It helps us to understand how we may be able to treat diseases that affect the immune system itself, such as HIV or B cell lymphoma,” Dr Kallies said.

Professor Sharon Lewin, the Director of the Peter Doherty Institute for Infection and Immunity, a joint venture of the University of Melbourne and Royal Melbourne Hospital and a co-author on the study, said there were a few ways this discovery could be translated into a treatment for people with chronic infections.

“We could potentially transfer these specialised super potent killer T cells into patients, or we could treat patients with proteins that can drag these specialised killer T-cells into the right spots, specifically to the hot spots where HIV can hide on antiviral treatment,” Professor Lewin said.

Dr Yu said he hoped human trials of such treatments would begin within the next five years.

The researchers’ work was supported by several international funding bodies, including the Australian National Health and Medical Research Council, the Sylvia and Charles Viertel Foundation, the amfAR Research Consortium on HIV eradication, the National Institutes of Health, the International AIDS Society and the Creative and Novel Ideas in HIV Research Program.