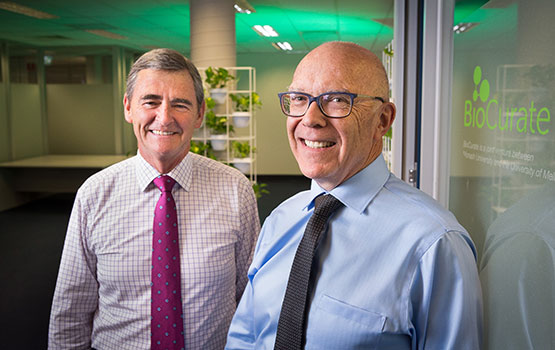 An outstanding industry leader with exceptional national and global experience in successfully propelling important biomedical discoveries out of the lab and into the market has been appointed inaugural CEO of BioCurate Pty Ltd.

This AUD $80 million venture was launched last year by Monash University and the University of Melbourne and supported by the Victorian Government. The appointment is the result of an extensive international and national search.

Chair of BioCurate and former Premier of Victoria (2007-2010) the Hon. John Brumby AO today announced the appointment of Dr C. Glenn Begley as the CEO. Dr Begley has held senior academic positions in Australia, and worked in small biotech and large pharmaceutical companies. Most recently he was the Chief Scientific Officer of a privately-funded biotech company Akriveia Therapeutics, in California.

“I’m delighted to welcome Dr Begley back to Australia and into a pivotal role within this new enterprise,” Mr. Brumby said.

“Dr Begley brings an extraordinary combination of commercial, academic and clinical insight to this significant venture – the first of this scope and scale in Australia - whose ambition is to unlock the exceptional research capabilities of the University of Melbourne and Monash University and their partners in hospitals, medical institutes and industry, enabling significant new discoveries to be translated more rapidly into new medicines. The social and economic implications for Victoria and Australia are profound.”

A clinical haematologist and medical oncologist, whose academic and commercial roles include board level and senior positions in Australia, the USA and the UK, Dr Begley said he was looking forward to playing a leading role in shaping the strategic direction and operations of BioCurate Pty Ltd:

“I am delighted to be joining BioCurate at this important moment in its development,” Dr Begley said.

“Now more than ever it’s critical that important medical discoveries make it from the lab into new medicines and that the clinical and commercial benefits accrue to Australia. I am confident that BioCurate, building on the combined research strength of these two outstanding universities will ensure transformational drug candidates become a reality.”

Dr Begley will commence his appointment on 22 May 2017.

BioCurate is a joint venture of the University of Melbourne and Monash University, supported by the Victorian State Government. Announced in June 2016, its founding universities are placed in the world’s top ten in the therapeutic areas of immunology, oncology, paediatrics, neurosciences, and infectious diseases.

BioCurate offers a new model, designed to address the key challenges in early stage drug development, and will focus on those stages of development before a project is attractive to big pharma or venture capital funds. Its purpose is to increase the number, quality and rate of translation of new drug discoveries into medically sound and commercially attractive, investable projects.

BioCurate is owned jointly by the universities but is independently governed with the Hon. John Brumby as Chair and Dr. C. Glenn Begley as CEO.

“It is fantastic that a leading scientific innovator like Dr Begley, with his wealth of international commercial and research expertise, has been attracted back to Australia to lead this remarkable venture,” Mr Sloan said.
“Dr Begley’s appointment is a strong indicator of Victoria’s and Australia’s growing global presence in the field of drug discovery and commercialization, catalyzed by the groundbreaking partnership between two world-leading universities.”

Doron Ben-Meir, Vice-Principal (Enterprise) at the University of Melbourne, welcomed the appointment of Dr C. Glenn Begley to lead BioCurate.

“Dr Begley brings exceptional knowledge and expertise in the scientific field and biotech industry and will lead us into an exciting new era of commercialisation via this enterprise, bringing together the world renowned expertise of Australia’s leading research universities of Melbourne and Monash,” Mr Ben-Meir said.

Quote from the Victorian Government Minister for Industry and Employment, Wade Noonan:

“Melbourne is quickly cementing its place as a world-leader in medical technologies and pharmaceuticals, and we’re attracting the world’s best and brightest minds to help the sector grow and create jobs.

BioCurate will facilitate strong growth for Victoria’s pharmaceutical sector. The collaboration is expected to generate about $360 million in activity over the next 10 years, supporting the creation of new companies, investment opportunities, exports, and more highly skilled jobs for this vital industry.”

Dr Begley studied Medicine at undergraduate and postgraduate level at The University of Melbourne.