Discovery of why emus are grounded takes flight 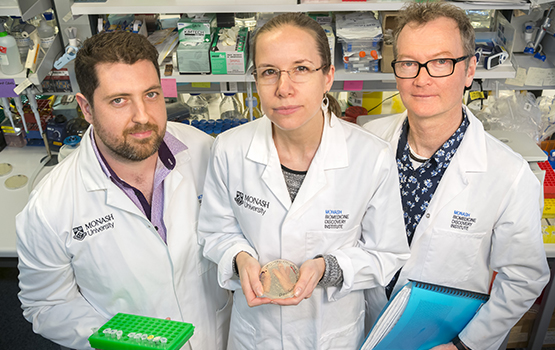 Researchers from Monash University’s Biomedicine Discovery Institute have helped solve the mystery of how emus became flightless, identifying a gene involved in the development and evolution of bird wings.

The research, published this week in Nature Communications, sheds light on how genes regulate limb development and may have application to humans born with limb abnormalities.

Monash Associate Professor Craig Smith and the Comparative Development team in the Department of Anatomy and Developmental Biology, worked with Dr Peter Farlie, Adjunct Lecturer at the Department, and his group at the Murdoch Childrens Research Institute (MCRI). They found that a gene called Nkx2.5 is turned on during the development of wings in emu embryos, but not in chickens or other birds, leading to greatly reduced wings.

The emu has vestigial wings measuring about 20 centimetres with only one small digit or claw. It is one of a group of large, flightless birds around the world called ratites.

“Until now, very little was known about the genetic basis of wing reduction during embryonic development,” Associate Professor Smith said.

The researchers initially investigated genes known for their established roles in regulating limb development but couldn’t find any with obvious changes that might explain limb reduction in the emu. This was the first clue that emus had a unique way of controlling the development of their wings.

They then worked closely with MCRI bioinformatics researchers, Dr Nadia Davidson and Dr Alicia Oshlack, who used the latest gene sequencing technology to identify all genes expressed in the relevant tissue. Nkx2.5 topped the list.

“It was very exciting because this gene had not been implicated in limb development previously,” Associate Professor Smith said.

“It is a well-known regulator of heart development and is mutated in some children born with heart defects. The gene may also be relevant to human limb development because it could be involved in previously unexplained congenital limb reductions.”

When Dr Farlie isolated the emu gene and inserted it into chicken embryos, they developed tiny emu-like wings.

“The transformation in the size and shape of the chicken embryo wings was remarkable. It really was an incredibly exciting discovery,” Dr Farlie said.

The researchers are conducting further research to determine whether deleting the gene in emus gives them typical bird wings – what’s called the “genetic rescue” of the phenotype or physical characteristic.

“Down the track, we may pursue it biomedically,” Associate Professor Smith said.

The study began at MCRI before Associate Professor Smith moved to Monash University. He initially developed the project with Professor David Lambert of Griffith University, Queensland.

This research was supported by the Australian Research Council.