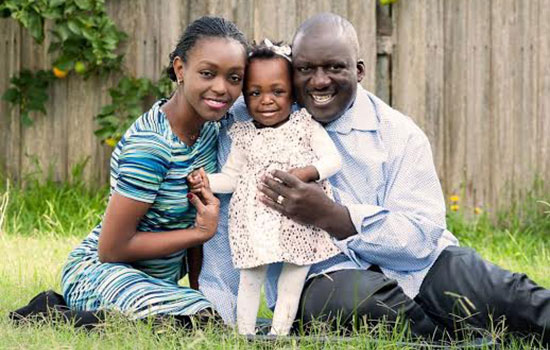 Michelle and Neville Were with their daughter Shifra

Each year in Australia, approximately 500 infants are born at less than 25 weeks gestation. These infants are very premature and experience a number of life-threatening issues.

More than one third of these babies develop bronchopulmonary dysplasia (BPD) - also known as chronic lung disease - combined with chronic pulmonary hypertension (PH), or high blood pressure, in the lungs. These infants can be very sick and experience long and repeated hospitalizations, requiring home oxygen for up to two years and an increased risk of mortality because of a vulnerability to infection. This places great stress on the family as well as hospital resources.

New research from Monash University’s Professor of Pediatrics, Arvind Sehgal – which will continue at the newly launched Monash Children’s Hospital - has provided early clues from the placenta, which may indicate which infants among this high risk cohort might go on to develop BPD associated PH during the weeks or months following birth. This opens avenues for individualised ventilator management, watching out for early signs of this complication, early echocardiographic diagnosis and therapy to improve lung function.

Professor Sehgal and his research team, including pathologist Dr Yuen Chan, tested the placentas of 56 mothers of very preterm babies (<28 weeks gestation) and noted peculiar histopathology markers which predicted ‘subsequent’ complications of BPD associated PH. These findings will be presented at the prestigious Society for Pediatric Research Annual Meeting, being held in San Francisco, USA in May 2017.

“The ability to predict which infants may become very sick will provide critical information for doctors managing these premature infants,” Professor Sehgal said.

Shifra Were is now almost three years old; she was born at 23 weeks gestation (the very borderline of viability), weighing 500g. She was critically ill with BPD associated PH and probability of her not surviving was very high.

Shifra was managed with state-of-the-art care at Monash Newborn, Monash Children’s Hospital. She not only survived, but was taken off home oxygen support within two months of discharge, and is now thriving in the care of her parents.

“It is infants like Shifra, we want to identify early and optimize their management to further improve outcomes,” Professor Sehgal said.

Professor Sehgal’s research group is the first in Australasia to demonstrate that the placenta contains a treasure trove of relevant information which can be used to improve the outlook for these premature infants.

About the Monash Children’s Hospital

Launched on 28 March 2017, the Monash Children’s Hospital is located at the Monash Medical Centre Campus in Clayton and adjoins the Monash Health Translation Precinct.