A major new funding injection from the Australian Government will see two breakthrough discoveries at Monash move towards commercialisation. 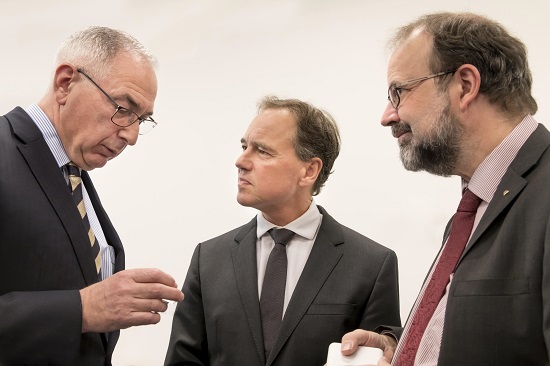 “Monash researchers are dealing with some of the most challenging problems that society faces in the medical field and we thank the Australian Government for recognising the critical nature of their work,” Professor Parlange said.

The Monash Vision Group (MVG) was awarded funding to commercialise a device that could restore vision in those suffering from blindness.

MVG has developed a wireless Brain-Machine Interface (BMI) offering the potential to bypass damage to nerves and neural pathways, restoring function to affected areas of the brain.

The BMI technology has been implemented in a cortical vision prosthesis (bionic eye) that is designed to bypass damage to the visual pathway and restore basic vision.

This funding will assist the transition between preclinical and clinical programs, allowing the utility of the visual prosthesis to be demonstrated. A company will be established to manufacture the BMI and commercialise the visual prosthesis. The aim of this company is to bring the product to market by 2021 to address the unmet need of a treatment for complete blindness.

MVG’s cortical vision prosthesis has been designed to treat a range of blindness causes, such as glaucoma and optic nerve damage, which are not suitable for retinal implants. The successful commercialisation of this technology will establish Australia as an exporter of implantable medical devices, and global market leader in BMI manufacturing.

First ever test for Sepsis could save millions of lives

The Federal government announced around $300,000 in funding to Biotech Resources in partnership with the Monash Centre for Biospectroscopy to combat sepsis – one of the leading causes of hospital deaths in Australia.

The Centre and Biotech Resources, in conjunction with the Alfred Hospital, Monash Health, and Hydrix will develop a new test for the identification of pathogens that cause sepsis. Biotech Resources will match the $292, 500 funding.

Sepsis is a life-threatening disease that results in the deaths of over 6 million people every year around the world, and more than 5,000 Australians. It is time critical medical emergency. Every hour without treatment increases a patient's chance of dying.

Currently there is no definitive test for sepsis with more than 30 per cent of cases going misdiagnosed. Aimalux aims to provide a diagnostic result within 35 minutes, to revolutionise the way sepsis is currently diagnosed, reduce healthcare costs, and save lives.

For more information on the BioMedTech Horizons program and first round recipients, visit www.mtpconnect.org.au/biomedtechhorizons.