Flood mapping technology to save lives, communities in India 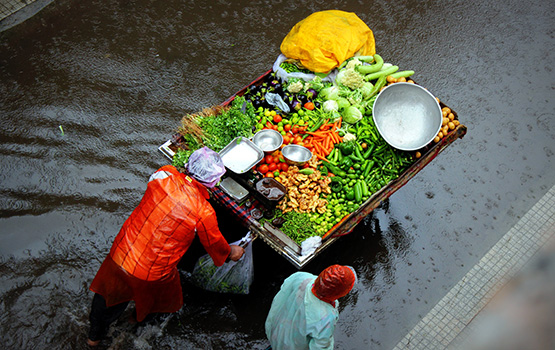 Using ground-breaking technology, researchers at IITB-Monash Research Academy are set to help authorities in India save lives and communities at risk of extreme flooding and other natural disasters.

New research by PhD student in Engineering, Kesav Unnithan, is using readily-available satellite data to identify the presence of surface water across India and create a flood mapping tool that can help authorities warn communities of imminent threats to life due to extreme rainfall.

If successful, this flood mapping technique has the potential to be used internationally to warn and prepare communities for extreme weather events, such as floods caused by high rainfall, cyclones, and typhoons.

Floods increasingly affect communities in developing countries, especially on the Indian subcontinent. This is mainly due to extreme precipitation events, which have increased three-fold since 1950 due to climate change, combined with poor infrastructure.

Severe and prolonged rainfall events, with higher frequencies, can inundate larger areas, causing high fatalities and extensive damage to property. Downstream effects due to flooding include loss in agricultural products and commercial production and income – integral to the Indian economy.

India ranks as one of the world’s most flood-prone countries. With predicted higher frequency of extreme events, and the fact that more than 12 per cent of its total geographical area is at risk of flooding, Indian communities are in desperate need of life-saving, assistive technology that can help them take emergency measures for extreme weather events.

In 2018, excessive flooding in the south-western state of Kerala claimed 483 lives, impacted 5.4 million people, and shut down the state’s airport, which was built on a floodplain.

“At present, we can predict which regions will receive heavy rainfall and also track the changes in water level at specific sites. However, flooding is not uniform from region to region, hence we need to monitor it differently,” Mr Unnithan said.

“My research identifies that in order to predict which region will be most impacted, we need a model that can regulate two aspects of flooding.

“Firstly, the model has to track flooding across large geographical areas. Secondly, due to differences in terrain, flooding can impact various areas of regions in varying degrees. Hence, we need a model that can take into account the topographical impact of flooding for a given area.

“Through this model, I was able to mark the maximum amount of inundation for the 2018 floods in Kerala. My next goal is to conceptualise a comprehensive flood modelling system specific to India.”

CYGNSS is a NASA eight-satellite constellation launched in December 2018, which uses GNSS - R to characterise hurricane and cyclone behaviour. However, these signals are also sensitive to the presence of surface water and suitable for flood mapping.

Because of its free, near-global data coverage, CYGNSS has practical uses in observing flood extents, which is used for calibrating flood models that inform people beforehand of impending calamity, Mr Unnithan said.

“Once we have access to future predicted rainfall values from climate models, hydrological models are used to convert them into runoff values. Our flood inundation model then makes assumptions on river velocity and geometry, and provides a quick but detailed analysis for regions of interest, without compromising on the accuracy of predicted flood extents,” he said.

Mr Unnithan hopes this research can help the scientific community in India improve the accuracy of flood events and provide much needed support to affected communities.

“Once we’ve trialled the model across different topographic conditions and predicted rainfall values, we can then have a faster, more efficiently predicted probability of flood mapping associated with a future rainfall event for any region in the world.”