Kidney findings a first for Japan 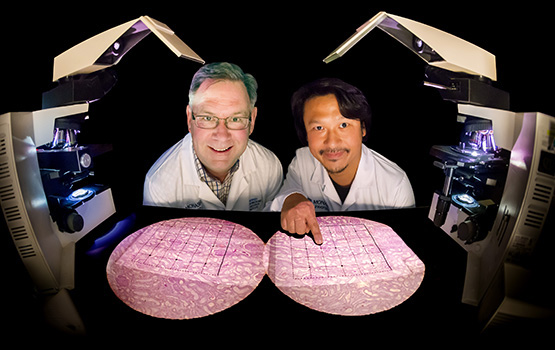 Monash University’s Biomedicine Discovery Institute (BDI) scientists in Melbourne, Australia, collaborating with researchers from the Jikei University School of Medicine in Tokyo, have shown for the first time that Japanese people have significantly fewer nephrons, the tiny filtering units in kidneys, than most other races.

Their research supported a link between low nephron count and hypertension (high blood pressure), which is a major risk factor in the long-term for diseases including coronary artery disease, stroke and heart failure. It also found a link with chronic kidney disease (CKD).

One in eight people in Japan have CKD, the second highest rate of the disease in the world.

Professor Bertram said the concept that low nephron count could be responsible in part for hypertension emerged in the 1980s but was controversial and hard to verify due to the minute size of the structures and because the only way this could be done was using tissue from an autopsy.

“This paper, the first such study in an Asian population, shows that Japanese with hypertension have significantly fewer nephrons than normotensive Japanese do – it’s a clear-cut finding,” Professor Bertram said. Kidneys regulate high blood pressure in a number of ways.

People in Japan had around 640,000 nephrons, a figure that dropped to 392,000 if they were hypertensive and 268,000 if they had CKD. This compared to a European average of around 900,000 nephrons. A low count meant the kidneys were less able to cope if the person went on to develop obesity, diabetes or other disease affecting kidneys later in life.

Professor Bertram and his team are world leaders in the field of nephron counting, responsible for the bulk of research into this including the previous finding that Indigenous Australians had less nephrons than non-indigenous people.

Dr Kanzaki, an internationally recognised expert in kidney biopsy, said the research has implications for the futures of low-weight babies. “There is a trend towards Japanese women staying thin and small during pregnancy to try to look beautiful but their babies are more likely to be born smaller and with smaller kidneys and therefore less nephrons – the number of nephrons is set at birth,” he said.

Low nephron count could potentially help predict hypertension or CKD in the future if a safe, non-invasive method was developed to replace the one relying on autopsies, Professor Bertram said. “Ultimately, you would hope that health professionals will think more about low birth weight although the idea’s not there yet.”

The research was supported by the Japanese Kidney Foundation and the Japanese Society for the Promotion of Science.

About the Jikei University School of Medicine

The Jikei University School of Medicine, founded in 1881, is a private university located in Minato, Tokyo, Japan. The university administers the faculty of medicine, the graduate school for medical research, the three training schools for nurses, and the four attached hospitals. The faculty of medicine has two schools: the school of medicine and the school of nursing. All our institutions are engaged in education, research, and clinical service.