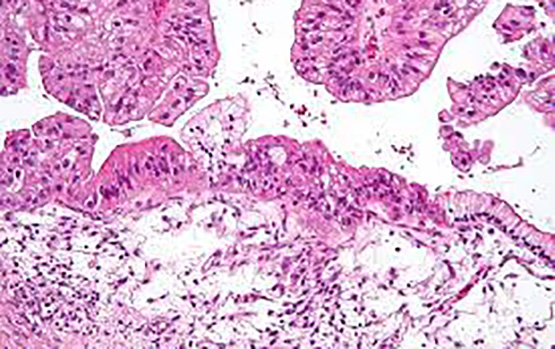 A global team of cell biologists and engineers has created a 3D tumour model that could lead to an improved understanding and treatment of ovarian cancer.

An international team of cell biologists and engineers has created a three-dimensional (3D) tumour model in the laboratory for ovarian cancer that could lead to improved understanding and treatment of the disease.

The international team, led by the University of Nottingham and Queen Mary University of London, and involving Monash University, created a multicellular 3D model with a new biomaterial that recreates how tumour cells grow in ovarian cancer and respond to anti-cancer drugs.

The hydrogel biomaterial is made through the co-assembly of peptides with proteins found in ovarian cancer. The formation enables the peptides to assemble these proteins into molecular environments, mirroring their presentation in ovarian tumours.

This world-first study, published in the prestigious journal Science Advances, shows the potential for ovarian cancer cells to be reproduced outside the human body, in their fullest capacity, to test anti-cancer treatments and their effectiveness.

Associate Professor of Chemical Engineering and Materials Science and Engineering at Monash University and study co-author, Daniela Loessner, says this new biomaterial approach could lead to more effective testing of new drugs and treatments for ovarian cancer before they enter clinical trials.

“The benefit of using a 3D tumour model is that this third dimension resembles the tissue structure and composition of a patient tumour. This is different to current practice that includes growing tumour cells on plastic dishes or using research animals – both of which fail to mimic key features of human tissues,” Associate Professor Loessner said.

Currently, the gold standard for 3D tumour models is a commercially available product consisting of a soluble membrane extracted from mouse sarcoma. The product’s success is through its capacity to enable cell-matrix interactions, which promote the growth of cancer and cancer-associated stromal cells.

However, the product lacks control in mimicking the tumour microenvironment due to its batch variability, undefined composition, and animal origin. These limitations prevent the usage of this product from effectively screening and developing new cancer treatments.

Associate Professor Loesser says the study demonstrates the capacity to engineer a 3D matrix that can serve as a complex, yet controllable, alternative.

“By allowing more efficient drug testing, we hope to improve the outcomes of patients diagnosed with ovarian cancer, which still accounts for more deaths than any other cancer of the female reproductive system,” Associate Professor Loessner said.

“We can also develop new treatment strategies that slow down or reduce tumour burden and prolong the survival time of patients.”

Professor Alvaro Mata, from the University of Nottingham’s School of Pharmacy, led the study. He said: “The peptide / protein composite matrix was designed to attempt to resemble the physical, biomolecular and cellular features of tumours present in patients.

“This suggests that the usage of this new biomaterial could lead to more effective testing of new drugs and treatments for ovarian cancer.”