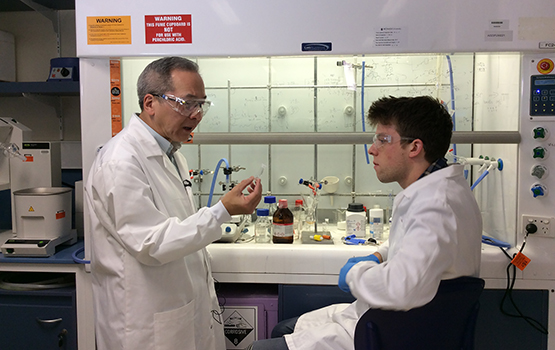 Professor San Hoa Thang AC has been recognised as a Companion of the Order of Australia in the 2018 Queen's Birthday Honours List.

Fifteen academics from Monash University have today (Monday 11 June) been recognised in the 2018 Queen’s Birthday Honours List for their outstanding contribution to Australian society through teaching, research, innovation and community leadership.

Monash University Chemistry Professor, San Hoa Thang AC, received the nation’s highest honour – a Companion of the Order of Australia (AC) – for his service to and expertise in the fields of polymer chemistry and materials science.

His work in developing a range of applications such as performance coatings, adhesives and cosmetics – which has attracted worldwide interest from industry – contributed to Professor Thang’s recognition.

Professor Thang was one of only 10 illustrious Australians to have their lifetime achievements acknowledged as Companions, including triple Brownlow medallist Bob Skilton and movie editor Jill Bilcock.

The Vietnamese-born Professor arrived in Australia as a refugee in 1979. Professor Thang says he’s humbled by the accolade and grateful to Australia for accepting him into the country 40 years ago.

“Australia has opened so many doors for me and has allowed me to pursue my passion and love of science,” said Professor Thang.

“It is very emotional because it reminds me of the sacrifices and challenges I faced. But there were also many kind and generous people I met and many precious opportunities came my way to help with a career I once thought might no longer have been possible.

“I am very grateful for what I have been able to achieve in Australia and I want to continue to inspire others.”

Four Monash University academics were also among the 68 Australians recognised as Officers in the General Division of the Order of Australia (AO).

Co-Founder and Director of the Australian and New Zealand Intensive Care Research Centre and Professor of Critical Care Research, Rinaldo Bellomo AO, was acknowledged for his distinguished service to intensive care medicine.

Professor Christopher Fairley AO from the Melbourne Sexual Health Clinic was commended for his distinguished service to community health, particularly in the area of infectious and sexually transmitted diseases.

Dr Paul Wood AO, Adjunct Professor in Paediatrics, was recognised for distinguished service to science, and to global human and animal health.

Emeritus Professor Vernon Marshall AO was also acknowledged for his distinguished service to medicine, particularly to renal transplant surgery and organ preservation, and to accreditation and professional standards, as an academic, author and clinician.

Five Monash University academics joined 181 Australians recognised as Members in the General Division of the Order of Australia (AM):

Monash University recipients of the Medal of the Order of Australia in the General Division (OAM) include: