Monash ‘changes it for good’ in Singapore

Monash University is ‘changing it for good’ in Singapore, with the international launch of the largest philanthropic campaign in its 60 year history today. 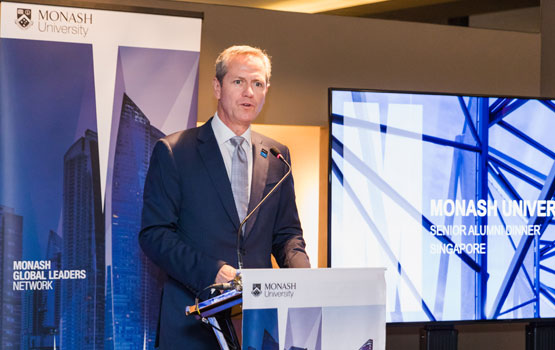 Monash announced the ‘Change It. For Good’ campaign last month with a goal of raising $500 million from 50,000 donors, and doubling the number of bequests made to the University.

The campaign is the next ambitious leap forward in the University’s mission for students, researchers and global alumni community to drive change on a local, national and international scale.

Philanthropy has contributed to the acceleration and success of world-leading research, hands-on learning opportunities for students and community engagement initiatives at Monash.

Through the World Mosquito Program, Monash University is helping to protect global communities from mosquito-borne diseases such as Zika, dengue and chikungunya.

The World Mosquito Program is made possible by the support of some of the world’s most influential philanthropists, as well as a growing community of Monash alumni donors.

The Bill & Melinda Gates Foundation (BMGF) and Wellcome Trust (WT) have contributed AUD$185 million to the program since 2010, and in 2018 announced a new philanthropic investment of AUD$50 million.

WMP Director, Professor Scott O’Neill, said he was grateful to the Bill & Melinda GatesFoundation and Wellcome Trust for backing the project.

“Thanks to this new funding, we’re on track to having a really major impact on these mosquito-borne diseases globally, and at large city scale, as we’re showing in densely populated cities such as Rio de Janeiro in Brazil and Medellin in Colombia," Professor O’Neill said.

"We're now operating in 12 countries, and it’s very gratifying to see since our first trials in Cairns and Townsville, how this Australian technology is going around the world to help protect many more communities affected by these diseases."

Marcus Ward, Chief Philanthropy Officer at Monash said donations had already saved and transformed countless lives, and the campaign is geared to build on that momentum.

“We are incredibly proud of the connection we have with our community of 350,000 alumni worldwide – a group that continues to grow every year,” Mr Ward said.

“A strong culture of giving has emerged through our shared vision of bringing positive, practical change to the world – whether that is equity scholarships for disadvantaged people to access education, or a multi-national research project to address the grand challenges of the age.”

“Here in Singapore we have a very active alumni community who have chosen to make significant donations to Monash, and we hope that the launch of this campaign will take their impact to the next level.”

Monash is calling on 50,000 unique donors to become ‘champions of change’ and help the University deliver a positive and lasting future for all people, underscored by advances in technology, healthcare breakthroughs, social justice, cultural endeavours and environmental awareness.

The campaign is built around four pillars through which Monash demonstrates an ability to create permanent, lasting and positive change:

For more information, visit the 'Change It. For Good’ campaign page.