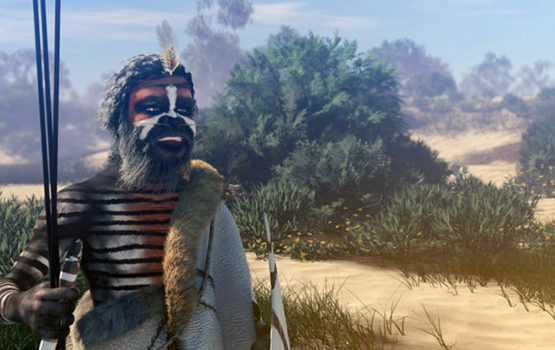 Monash University’s unique project to preserve, and in some cases bring back to life, Indigenous languages through animation, Monash Country Lines Archive, has been gifted an Indigenous name - Wunungu Awara: Animating Indigenous Knowledges.

The gift from the elders of the Yanyuwa people follows a generous donation from the Alan and Elizabeth Finkel Foundation, which will allow the project to continue and expand, and preserve more Indigenous languages.

The new name translates to a strong and healthy, a vital place.

A collaborative and co-creative project between the Monash Indigenous Studies Centre (MISC), Faculty of Arts, Monash Faculty of Information Technology’s SensiLab and Indigenous community groups, over 15 captivating 3D animations have been produced with more to come in 2019 and beyond.

The creation and delivery of the world-class 3D animations has engaged each community with its rich heritage, engendered a sense of pride in place and culture, and has assisted in the reclamation of languages and, in some cases, brought a language back to life after not having been spoken for nearly a century.

“Through the vision of Wunungu Awara, Indigenous stories and languages are brought to life through 3D animation that otherwise may have been lost. The forthcoming expansion of the MCLA will allow us to further preserve Indigenous history, protecting languages and knowledge into the future,” Professor Elston said.

The expansion was made possible by a generous $1.4M donation from the Alan and Elizabeth Finkel Foundation, allowing the program to continue leading research into important issues associated with Indigenous Australia, and to focus on the critical but often overlooked area of cross-generational knowledge within Indigenous communities throughout Australia.

The $1.4M donation contributes to the Change It. For Good. campaign, which is the largest public fundraising initiative in Monash University’s history. The campaign has achieved incredible results so far, reaching the halfway mark of each of its three goals, including $370M raised towards the goal of $500M, over 26,000 of the 50,000 donor target and the confirmation of more than 100 new bequests.

Wunungu Awara, formerly the Monash Country Lines Archive, was created in 2011 through a significant contribution by the Alan and Elizabeth Finkel Foundation. Its aim is to assist Indigenous Australian communities in language preservation and continuation of the associated inter-generational learning and knowledge sharing, through producing animations in partnership with Australian Indigenous communities, groups and organisations that tell their stories. For more information on Wunungu Awara , visit the website here: http://artsonline.monash.edu.au/countrylines-archive/.