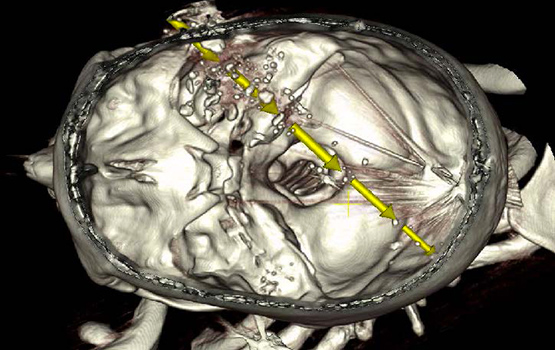 Monash University researchers are working on new technology that could one day help forensics track bullet paths in shooting victims.

In news that could fundamentally transform ballistics investigations in Australia and globally, Monash University and the Victorian Institute of Forensic Medicine (VIFM) are collaborating with the state coroner to develop this technology.

Information technology and biomedical research company Leidos has contributed $150,000 to the project. This contribution was made possible through the Monash Institute of Medical Engineering (MIME).

The project aims to use machine learning to create a digital 3D model of the human anatomy, including entry and exit wounds. This will allow investigators to record the trajectory of the projectile through the body, identify and localise projectile fragments, and may one day be able to assist in determination of projectile calibre and the range from which the projectile was fired.

With further development and industry support, it could also help investigators determine the type of gun used, and if the wounds were self-inflicted or resulting from attempted homicide.

“Ballistics in forensic medicine has traditionally involved fairly basic analytic techniques, which have not changed for a century,” Associate Professor Richard Bassed, the Deputy Director of VIFM, said.

“Before we had CT imaging, we were using x-rays to produce a 2D view of someone’s body, which made localising projectiles and fragments difficult without conducting an internal examination. Trajectory was determined using basic techniques such as long probes to determine a projectile’s path.

“Current imaging techniques can’t differentiate between bullet fragments and foreign metal objects, such as a pacemaker or dental fillings.

“This technology will allow us to make a 3D digital reconstruction of a shooting victim that we can then slice in multiple planes and directions using advanced computer graphics, including the use of augmented reality. We can then apply machine learning to determine trajectory and projectile fragmentation, and create a 3D-printed model that can potentially be used as evidence in a court of law.”

Chris Bain, Professor of Practice in Digital Health in the Faculty of Information Technology and Monash University’s Lead for Digital Health, said the project was just one example of how artificial intelligence and data science were transforming the digital health and forensic spaces.

“So, if we know the weapon and the damage it’s caused in the body, this technology could allow us to provide a more accurate representation of the range, distance and angle from which the bullet was fired,” Professor Bain said.

“This approach is much more scientific and rigorous than the way this procedure is currently performed, and fits with recent calls for improved forensic examination practices.

“The big picture is that post-mortems could be reduced for shooting victims, as this technology has the potential to scan and analyse the body, as opposed to the body being dissected. The technology could streamline workload and time efficiencies, and address any cultural sensitivities that may arise.”

Christine Zeitz, Chief Executive for Leidos Australia, said the group was proud to contribute to this groundbreaking research.

“The potential for this technology to influence the speed for making clinical decisions for better outcomes could be fundamental for the sector,” Ms Zeitz said.

“We’re also interested in how this research may influence the future development of health capability, particularly for our military and national security services.”

This initiative is one of the many ways Monash University is investigating the development and use of AI and machine learning for social good – one of the University’s core research pillars.