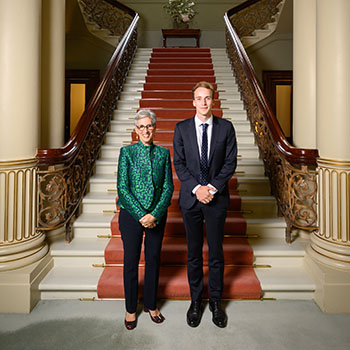 Monash University graduate Patrick Maclean has won the prestigious 2020 Victorian Rhodes Scholarship to study at Oxford University, where he plans to learn genomic techniques to improve the health of Australians.

Patrick recently graduated from Monash with a Bachelor of Medicine and Bachelor of Surgery (Honours), and will start working as a junior doctor next year. He focused on cancer in a public health context, and infectious diseases in laboratories during his course.

He hopes to study genomics through a doctorate in genomic medicine and statistics.

“I hope to learn cutting-edge genomic techniques, which may well become part of routine medical care during my career as a doctor.

“This will give me the skills to be at the forefront of an exciting new area of medical research, which will hopefully yield useful new treatments I can bring to my patients.”

Over the past few years, Patrick has volunteered overseas and mentored young people to build resilience and broaden their horizons through sport. He’s an avid kayaking competitor and coach, and volunteers on his club’s committee.

He’s looking forward to learning alongside the best and brightest students at Oxford University.

“I was inspired by the many Rhodes Scholars from Australia and abroad who have made huge contributions in their fields and in the wider community,” Patrick said.

“I’m also very excited about travelling to Oxford to live and work among some of the brightest and most energetic people in the world.”

The oldest and one of the most prestigious international graduate scholarship programs, the Rhodes Scholarships were established in 1903, under the will of Cecil Rhodes. Applicants are expected to demonstrate exceptional academic achievements, character, leadership and commitment to service. The primary goal of the program is to develop the leaders of tomorrow.

The recipient of the 2020 Rhodes scholarship for Victoria was announced by the Hon Linda Dessau AC, Governor of Victoria.

Each year, nine Rhodes Scholarships are available for outstanding Australians to study at the University of Oxford. One scholarship is offered in each of the states (NSW, Victoria, Queensland, Western Australia, South Australia and Tasmania), and three for Australia at large.