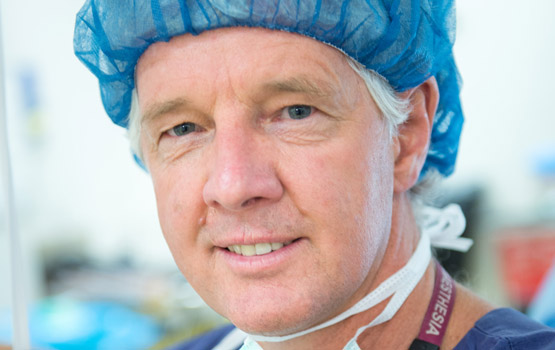 Monash University Professor Paul Myles has won Clinical Trial of the Year, awarded by the Australian Clinical Trials Alliance (ACTA).  The award was presented by Federal Health Minister, the Hon Greg Hunt MP, on Friday 19 May 2017.

Professor Myles is the head of the Department of Anaesthesia and Perioperative Medicine at Monash and Alfred. He has led a number of large studies involving many centres and thousands of patients, investigating the safety of the anaesthetic drug nitrous oxide, whether patients taking aspirin can safely continue up to and post-surgery, and the safety of an anti-bleeding drug called tranexamic acid (TXA). Results of these international multi-centre trials run across several countries have been published in the prestigious journals The New England Journal of Medicine (NEJM) (2016 and 2017) and The Lancet (2014).

The trial for which Professor Myles received the ACTA award is Aspirin and Tranexamic Acid for Coronary Artery Surgery (ATACAS) – results for which were published in NEJM last year.

The ATACAS team collaborated internationally with 30 hospitals across seven countries with over 4,600 patients participating. The results show that TXA could almost halve the number of people who suffer complications with bleeding following open heart and other major surgery.

“The results were very clear-cut and reassuring,” Professor Myles said.

“The findings mean that almost every heart surgery patient can now be treated with TXA, and that we can safely use a higher dose than previously. Use of TXA can also be safely expanded to prevent bleeding with other kinds of major surgery, such as knee and hip replacements, trauma surgery and spinal surgery, operations where TXA is not much used at present.”

Currently, each year about 15,000 Australians who have heart surgery (40 per cent of the total) need blood transfusions, and up to 1,000 need a second, emergency surgery.

“Routine use of TXA can halve both those figures,” Professor Myles said.

The ACTA award recognises the importance of the research and its direct influence on improving patient outcomes globally.