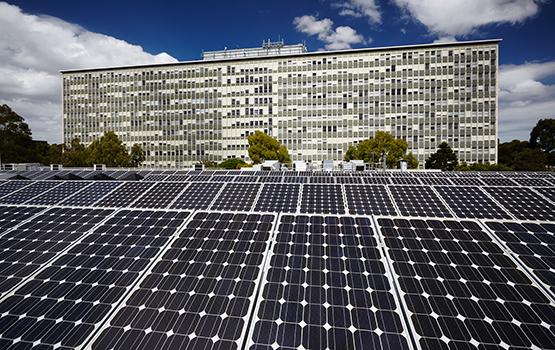 By the year 2030 Monash University expects all of the energy used on its campuses will be clean and renewable.

The university is investing $135 million to achieve its aim with a project called Net Zero.

Monash University President and Vice-Chancellor, Professor Margaret Gardner AO, said the Net Zero initiative was the most ambitious project of its kind undertaken by an Australian university.

“Leadership in sustainability of the kind to which Monash aspires requires much more than being carbon neutral by offsetting emissions through carbon credits or similar mechanisms. The University strives to completely eliminate its dependence on fossil fuels,” Professor Gardner said.

“Monash is actively reducing its emissions and, by transforming our energy infrastructure and following a deep decarbonisation strategy, ensuring that all the energy we use on our campuses is clean.”

As well as committing to net zero carbon emissions from their Australian campuses, all of Monash’s operations will also be carbon neutral by 2030.

Residual emissions from operations - such as plane travel - will be offset by purchasing certified and socially-conscious carbon offset programs.

“Clean affordable and reliable energy is something that we all want. This target is about putting our world leading research and campuses to work to show that a 100% renewable future is not only possible, but good for business and the planet too,” said Monash Engineering and Sustainability Manager Dr Rob Brimblecombe.

Net Zero is not an overnight revolution. Monash has been greening itself for some time – beginning in 2005 when the university began measuring its performance in emissions, energy use, waste, water and transport.

It then set an energy reduction target of 20 percent based on those early measurements.

In 2010 the first solar panels went in on each campus.

Now there are more than 4000 panels in place, enough to power 100 average Australian households.

Building is now under way at the Clayton campus for an on-site microgrid that will help the university control when and how energy is used.

The Monash microgrid will be connected to the Victorian energy grid, which in the future can reduce the demand and strain on the network during peak times.

The state government, through the Department of Environment, Land, Water and Planning (DELWP), contributed $100,000 seed funding for the Monash Microgrid.

The Net Zero Initiative is set to directly benefit research at the university, which is building the microgrid to model and assess the performance of energy network systems.

“The Monash Microgrid will provide a real-world example demonstrating how communities can keep their energy system affordable and resilient, in particular during peak periods and extreme weather events,” said Director of the Monash Energy Materials and Systems Institute, Dr Jacek Jasieniak.

“We’re using our campuses and research to develop scalable clean energy solutions that can be tested here and deployed around the world,” Dr Jasieniak said.

By the end of 2020, the university will complete its biggest solar roll out. By then, it will be generating 7 GWh of energy, the equivalent of powering 1000 homes in Victoria for a year.

The project supports the concept of Monash as a ‘living lab’, with research and teaching linked to operational sustainability.

Monash is also eliminating gas and moving to 100 per cent electricity.

“By 2030 all of our energy consumption will be electric and from renewable sources,” Professor Gardner said.

The university is also reducing the overall energy consumption of their operations.

This includes updating all of their campus lighting to LED, ensuring sustainability certification of all new buildings, and only investing in appliances and equipment that are energy efficient.