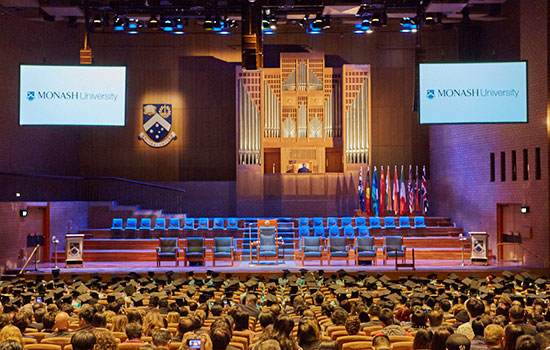 The extraordinary achievements of public sector and industry leaders, and those at the forefront of public health and politics have been recognised with Fellowships from Monash University.

At a ceremony in Melbourne, distinguished leaders in their fields were acknowledged by the University with the presentation of nine Fellowships and two Honorary Fellowships.

Fellowships recognising Monash alumni were presented to the following recipients:

Honorary Fellowships were bestowed upon the Hon Bruce Billson MP, former Federal Minister, and Emeritus Professor John Nieuwenhuysen AM, Emeritus Professor in Economics at Monash University, and a fellow of the Academy of Social Sciences of Australia.

President and Vice-Chancellor Professor Margaret Gardner AO congratulated this year’s recipients for demonstrating exceptional leadership and service to others.

“Monash was established to meet the challenges of the future; in these Fellowships the University celebrates individuals who have stepped up and made a sustained and significant contribution to transform their communities for the better,” Professor Gardner said.

The Monash University Fellowship is an honour awarded by the Council of the University in recognition of the achievements that alumni have made and continue to make through their professional distinction and outstanding service. Honorary Fellowships are awarded to individuals who are not Monash graduates.