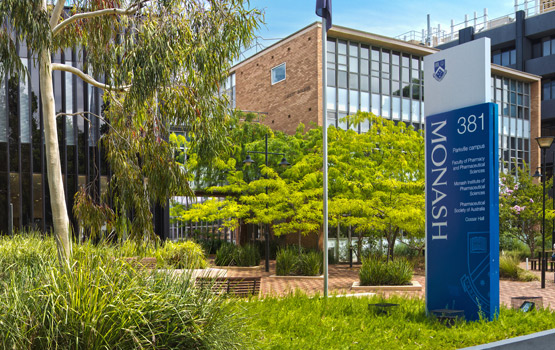 Monash University has ranked number one globally in the 2022 QS World University Rankings by Subject for Pharmacy and Pharmacology for the first time, making it Australia’s top-performing university.

Consistently ranked in the top three for the last five years for Pharmacy and Pharmacology, including number two in 2021, the number one ranking is Monash’s best result in the annual global subject rankings. The result leads to an impressive showing for Monash in this year’s rankings, with top tier rankings in Education (13th), Nursing (14th), Engineering - Mineral and Mining (22), Philosophy and Engineering - Civil and Structural (27), and Anatomy and Physiology (29th).

Monash University President and Vice-Chancellor Professor Margaret Gardner AC described the number one global ranking as a proud achievement for the University’s Faculty of Pharmacy and Pharmaceutical Sciences, and for the entire Monash community.

“Not only does this ranking place us as the number one university in Pharmacy and Pharmacology, it also demonstrates the excellence of our research and education in this field, which is critical for the future health of our community,” Professor Gardner said.

“It is a testament to the leadership of Faculty Dean, Professor Arthur Christopoulos, and the commitment and dedication of all Faculty staff. I offer my sincere thanks and congratulations to all who contributed to this remarkable result.”

The COVID19 pandemic and current mental health crisis have highlighted and reinforced the need for Australia to be at the forefront of modern drug discovery, development and manufacturing.

The Faculty, known for its high profile research through Monash Institute of Pharmaceutical Sciences (MIPS), is responsible for the development of Australia’s first mRNA vaccine candidate for COVID-19 and in 2021 launched the Neuromedicines Discovery Centre. The NDC is an end-to-end academic enterprise for the discovery, development, evaluation, manufacture, and clinical rollout of 21st-century medicines to treat mental health disorders, as well as the Medicines Manufacturing Innovation Centre, which supports Victorian biotech and pharma companies to develop a competitive edge and retain jobs within the state.

With the health sector under pressure, new ways to tackle existing health conditions are needed that go beyond the current medicines and practices. Monash is well-positioned physically, as part of the Monash Technology and Melbourne Biomedical Precincts, and through the breadth of its research capability, which extends from medicine discovery through to clinical application.

Faculty of Pharmacy and Pharmaceutical Sciences Dean, Professor Arthur Christopoulos, said: “The pandemic has certainly reinforced the crucial and frontline role that pharmacists and pharmaceutical scientists play in society. Over and above their normal services, we’ve seen the whole sector step up and play a huge role in vaccine rollout.

“In addition to developing Australia’s first mRNA COVID vaccine candidate, we’ve launched a number of major biotech startups,  including Septerna which launched in February 2022 with $140 million (AUD) worth of Series A financing from tier-one venture capital firm Third Rock Ventures in the US, and a new Centre to address the urgent need for safer and more effective medicines to treat mental ill-health,” Professor Christopoulos said.

“It’s a dynamic vocation and we’re so proud that Monash has been recognised for its agility, resilience and global excellence in this field.”

The QS World University Rankings assess the performance of more than 1,300 universities worldwide. The Rankings are compiled from an analysis of more than 13.9 million unique papers and global surveys by employers and academics.

For more information about the rankings visit topuniversities.com.