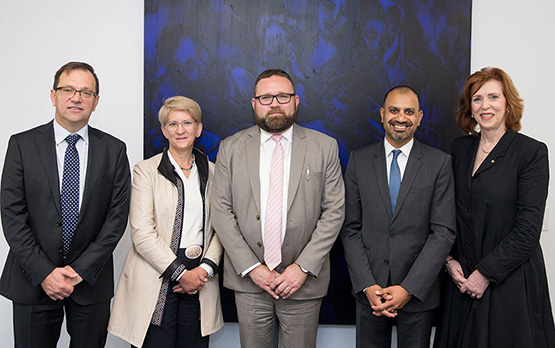 A visit to Monash University has highlighted how academic partnerships between countries can create innovation with global benefits.

On October 3, and coinciding with German Unity Day, Monash hosted members of the German Academic Exchange Service (DAAD) to highlight opportunities for academic exchanges between Australia and Germany.

Hosted by Monash Global Engagement and Graduate Education, Monash staff and students attended presentations by Professor Joybrato Mukherjee, President of Justus-Liebig University and Vice-President of DAAD, Mr Stefan Bienefeld, Director of Development Co-operations and Supra-Regional programs at DAAD and Dr Judith Reinhard, Head of Science and Innovation at the Embassy of the Federal Republic of Germany.

This partnership is funded as an International Research Training Group (IRTG) by a German Government research funding agency, which facilitates a collaborative research program in men’s reproductive health.

Described by Prof Mukherjee as a “flagship” partnership of successful German-Australian scientific exchange, the Monash-JLU IRTG draws together postgraduate students and scientists at both universities to discover new diagnoses and treatments for common men’s reproductive health disorders.

As well as enabling a global research effort, the Monash-JLU IRTG provides the next generation of scientists with the tools and training to address crucial issues relating to men’s reproductive health.

Doctoral students receive a specialised translational training program and access to leading technology platforms.  They are jointly supervised by teams of clinical and basic scientists at both Monash and JLU, and have the opportunity to receive a joint PhD award from both Universities.

IRTG students presented their work on male reproductive disorders relating to the development of testicular cancer, the underlying causes of infertility, and the treatment of prostate disease. Each gave a personal account of how their training within the global IRTG partnership provided both personal and professional benefits.

The Monash IRTG spokesperson, Professor Kate Loveland, spoke about the evolution of the Monash-JLU IRTG, from its beginnings in the 1990s, when German scientist Prof Dr. Andreas Meinhardt undertook his postdoctoral studies with Professor David de Kretser at Monash.

This resulted in a long history of collaborative research between the two countries which culminated in the award of the Monash-JLU IRTG in 2013, now funded until 2022.

Professor Loveland spoke about the benefits of the global research effort, highlighting how the program capitalises on the unique skills and technologies at each University, producing a collaborative gain that is much greater than would be achieved by individual research projects.

Professor Loveland also discussed the practical logistics of operating a global research program, highlighting how this program has produced many tangible benefits for both Universities, including successful PhD graduates, student awards, joint research publications and further competitive research support from the NHMRC.

Professor Loveland also explained that this IRTG was the first of three IRTGs between Australia and Germany, and is leading the way in PhD student exchange between the two countries.

Mr Bienefeld also gave a presentation explaining how the German government has optimised and streamlined many aspects of its scientific exchange processes, highlighting the many opportunities for both students and academics to work in Germany and to participate in global research efforts.