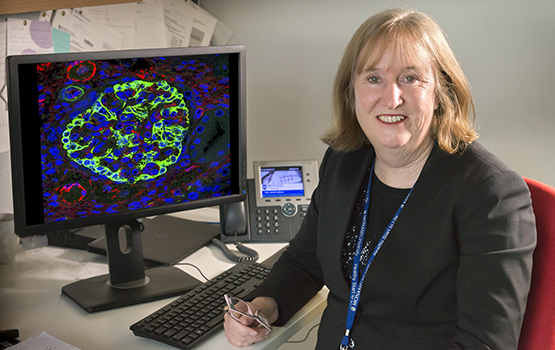 How healthy we are in adulthood is, in many ways, determined while we are still in the womb.

Babies born prematurely could be at greater risk of developing kidney disease later in life according to a landmark Monash University study investigating the impacts of preterm birth on kidney development.

Named today as one of the NHMRC’s Ten of the Best Research Projects for 2016, Professor Mary Jane Black’s team, including post-doctoral fellow Dr Megan Sutherland and PhD student Dana Vojisavljevic, from Monash University’s Biomedicine Discovery Institute, collaborated with Associate Professor Gurmeet Singh, from the Menzies School of Health Research, and Professor Wendy Hoy, from the University of Queensland on the study.

In particular, the researchers studied two common causes of prematurity - intrauterine growth restriction (IUGR), as happens when there is insufficient oxygen and nutrients being transported by the placenta to the fetus, and chorioamnionitis, (maternal infection of the chorion andamnion), on the health of the baby’s kidneys once they are born.

As part of this study, the researchers conducted studies of renal function in term and preterm infants in the first month of life at Monash Newborn and at the Royal Darwin Hospital.

The inclusion of preterm babies born at the Royal Darwin Hospital is important, because a high proportion are Indigenous.

Professor Black’s research linking preterm birth and poor renal health may explain why there is an increasing incidence of kidney disease in Indigenous Australians.

“This may in part be a legacy of the increased survival of preterm babies in recent decades; with preterm birth and factors associated with preterm birth, leading to changes in the kidneys that render them vulnerable to kidney disease later in life,” she said.

Using animal studies, where renal development and the formation of nephrons closelyresembles that in the human, Professor Black and her collaborators have shown that impaired growth of the infant in the womb adversely impacts the number of nephrons formed in the kidneys and this can also occur, under some circumstances, following inflammation in the womb (caused by chorioamnionitis).

Committed to making the discoveries that will relieve the future burden of disease, the newly established Biomedicine Discovery Institute at Monash University brings together more than 120 internationally-renowned research teams. Our researchers are supported by world-class technology and infrastructure, and partner with industry, clinicians and researchers internationally to enhance lives through discovery.