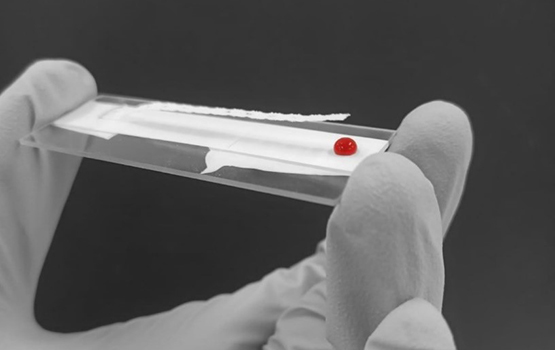 Engineers at Monash University have developed a diagnostic that can help deliver urgent treatment to people at risk of dying from rapid blood loss.

Engineers at Monash University in Australia have developed a fast, portable and cheap diagnostic that can help deliver urgent treatment to people at risk of dying from rapid blood loss.

In a world-first outcome that could save more than two million lives globally each year, researchers have developed a diagnostic using a glass slide, Teflon film and a piece of paper that can test for levels of fibrinogen concentration in blood in less than four minutes.

Fibrinogen is a protein found in blood that is needed for clotting. When a patient experiences traumatic injury, such as a serious car accident, or major surgery and childbirth complications, fibrinogen is required in their blood to prevent major haemorrhaging and death from blood loss.

Typically, heavily bleeding patients must be transported to a hospital or emergency centre where they undergo diagnostic tests before being treated. These tests are time consuming and costly as they require expensive equipment, specialised/trained personnel and can take up to half an hour.

This new development by researchers at Monash University’s Department of Chemical Engineering and BioPRIA (Bioresource Processing Institute of Australia), in collaboration with Haemokinesis, removes the need for centralised hospital equipment to detect, monitor and treat fibrinogen levels – something never achieved until now.

Additionally, this diagnostic can be upscaled into a point-of-care tool and placed in ambulances and other first responder vehicles, in regional and remote locations, and in GP clinics. It takes just four minutes to complete.

Findings were published in the prestigious journal, ACS Sensors.

“When a patient is bleeding heavily and has received several blood transfusions, their levels of fibrinogen drop. Even after dozens of transfusions, patients keep bleeding. What they need is an injection of fibrinogen. However, if patients receive too much fibrinogen, they can also die,” Professor Garnier said.

“There are more than 60 tests that can measure fibrinogen concentration. However, these tests require importable machinery on hospital table tops to use. This means that critical time has to be spent transporting heavily bleeding patients to a hospital - before they even undergo a 30 minute diagnosis.”

PhD candidate in the Department of Chemical Engineering and research co-author, Marek Bialkower, said the implications for this diagnostic are significant.

“Our diagnostic can eliminate the preparation time, labour and transportation difficulties of traditional techniques used in the hospital, Mr Bialkower said.

“It can diagnose hypofibrinogenemia in critically bleeding patients anywhere in the world, and can drastically reduce the time to treatment needed for fibrinogen replacement therapy. The test can take less than four minutes, about five times faster than the current gold standard methods.”

The test works by placing a pre-mixed droplet of a blood sample and an enzyme solution onto a solid surface, allowing it to clot, and then dropping a paper strip on top. The further that blood moves down the strip of paper, the lower the fibrinogen concentration.

The diagnostic can work with a variety of blood conditions. Furthermore, diluting blood samples not only increases the test’s sensitivity, but also eliminates the effect of interfering substances in the blood.

Hypofibrinogenemia (insufficient fibrinogen to enable effective clotting) in critical bleeding is common. More than 20 per cent of major trauma patients have hyperfibrinogenemia.

Dr Clare Manderson, Research Fellow in the Monash Department of Chemical Engineering and co-author of the study, said the early diagnosis of hypofibrinogenemia could stop bleeding in these patients and save their lives.

“The development of the world’s first handheld fibrinogen diagnostic is a game changer for the millions of people who die each year from critical blood loss. It will also ease pressure on emergency departments knowing that this life-saving treatment can be delivered on site and in quick time,” Dr Manderson said.

“Our capacity to develop this diagnostic using cheap and readily available materials means it can be easily commercialised for use across the world.”

The research was funded by an ARC Linkage grant and Haemokinesis, which owns the intellectual property.