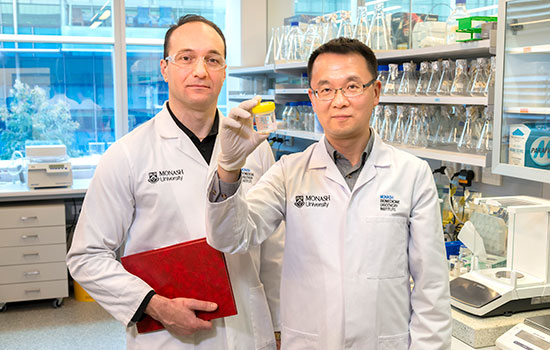 Of the funding awarded by the NIH, US$1 million will be directed to the Monash BDI to support work focused on optimising the current use of antibiotics to keep pace with ever-evolving bacterial ‘superbugs’.

Antibiotic resistance is considered an urgent global medical challenge identified by the World Health Organization (WHO) and a number of other major health authorities.

Led by Professor Jian Li at the Monash BDI, the research aims to improve the use of a class of antibiotics called polymyxins to treat deadly lung infections caused by multidrug-resistant bacteria. Polymyxins are alast defence against bacterial pathogens called Gram-negative ‘superbugs’.

Lung infections caused by bacterial ‘superbugs’ represent a major global health and economic burden, accounting for many cases of hospital-acquired pneumonia. In Australia, pulmonary infections cost more than $150 million in direct costs and significantly more in indirect costs every year.

Intravenous polymyxins have been increasingly used as a last-line therapy for lung infections but their efficacy in patients is poor due to very limited drug exposure in the lungs. Unfortunately, polymyxin resistance has been reported worldwide.

Professor Li, an NHMRC Senior Research Fellow, is collaborating with Assistant Professor Tony (Qi) Zhou from Purdue University in Indiana, US, and Senior Research Fellow Dr Tony Velkov from the Monash Institute of Pharmaceutical Sciences (MIPS) to develop novel inhalation therapy with polymyxin combinations. His team is gathering the essential pharmacological information required to optimise their use in the clinic.

Dr Velkov said, “Gaining another large NIH grant is an outstanding achievement for the team and a reflection of our longstanding track record in the field.”

This large NIH R01 grant is the fifth awarded to Professor Li since 2012, in addition to three others awarded to him as a key investigator – a rare honour.

Director of the Monash BDI, Professor John Carroll, said, “NIH R01 grants are extremely competitive, even in the US. The award of this grant reflects the international leadership of Jian’s team.  Tackling antimicrobial resistance is a major focus for the BDI and this award is testament to the quality of Jian’s research.”

Professor Li’s group is considered a world leader on polymyxin pharmacology and drug discovery. It has pushed the field well beyond the boundaries of where others are researching.

The current use of polymyxins in clinics has also significantly benefited from Professor Li’s research.

The researchers predict that this project will do the same – coming up with a better way of delivering polymyxins or a combination directly to the lungs to overcome resistance and toxicity. Importantly, it targets a significant unmet medical need internationally, they said.